Evolve is, well, evolving. Turtle Rock and 2K intend to support their asynchronous hunting game for a long time, and it all starts here with one massive, boulder-shouldered brute called the Behemoth. He’s the first new monster to be added to the game, and he’s really quite something. In fact, he’s the most fun you can have in Evolve.

Facing off against the Behemoth are four new hunters; a rag-tag collection of cyborgs, bug-eyed aliens, and radar-pinging bats. They make up the ‘Hunting’ Season Pass, whilst the Behemoth came as a pre-order bonus for Evolve. If you were later to the party than the most eager orderers, let me be your guide to if the new DLC is worth looking at.

The Behemoth is rock and roll, quite literally. He’s got a hide made from great jagged rocks, and can tuck himself into a great ball and roll forward like a murderous Sonic the Hedgehog. And at about another third larger than the Goliath, he’s a big, brash brute. Stalking through the plant life of Shear’s jungles, the Behemoth feels just that little more powerful. And that’s not a ruse.

Armed with the ability to spit lava, cause earthquakes, erect rock walls, and reign-in hunters with a huge tongue, the Behemoth is an attack-heavy monster. The rock walls can effectively cut hunters off from the rest of their party if deployed right, and since they’re indestructible until they fade, you can beat down your trapped foe whilst the other hunters are powerless to reach you. Should they find a way around your defences, curling into a ball and retreating is as easy as hitting the spacebar. You can roll for as long as you’ve got stamina, and anything in your path takes damage so it’s a useful offensive move, too. It does leave a trail of fire behind you though, so chasing hunters can easily track where you’ve rolled off to.

I genuinely love the Behemoth. The few-second delays on all his skills mean there’s a little pre-planning required for every attack, but being able to successfully block routes with the rock wall and drag enemies in like the Smokers from Left 4 Dead makes him a versatile and consistently useful monster. He’s far easier to learn than the likes of the Kraken, and generally provides better results despite being unable to jump and moving slower than the other monsters. Across an entire afternoon of play with a handful of other journalists, the Behemoth only lost two games. 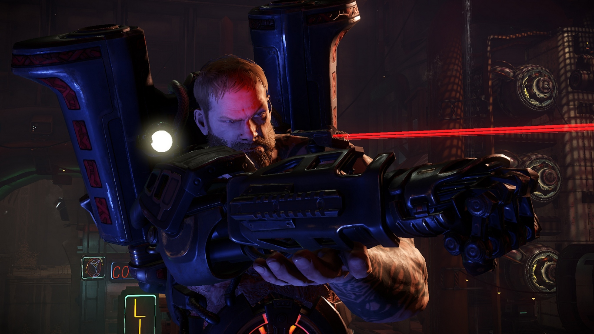 That may be down to the fact that the new hunters aren’t as great as you’d hope. In fact, of the four, I found only the new Support character Sunny really offered a fun, useful experience. She’s packing a mini-nuke grenade launcher that causes great damage, and a buff that increases the jetpack recharge rate of other Hunters. For defence she can send out drones that provide an over-shield for allies. Simple to use, and largely effective in most situations.

New assault chap Torvald is more machine than man, his robotic arm a targeting device for the mortars that jut out from his back. Similar to Hank’s Orbital Barrage, the mortar fires a handful of shells at a ground target, and needs to be successfully pre-planned due to the wait for the shells to launch and land. He’s also got Shrapnel mines that identify weak spots on the monster that can be shot at for much higher damage. His main weapon is an automatic shotgun that fires all its rounds successively with a single pull of the trigger. With the larger clip perk, this means you output a huge amount of damage, but by firing everything at once you have to deal with a painful amount of muzzle climb, and a reload after every use.

Stepping into the Tracker slot is Crow, who takes home the awards for best character design (he could quite easily have been pulled from the Darksiders games) and for most useless pet. Gobi is an alien bat that can be dispatched to find the monster, but it feels like throwing a boomerang with a radar duct-taped to it. Unlike mutant dog Daisy, Gobi flies in a distinct straight line, meaning you’re constantly moving a few degrees around and dispatching him in hope that you’ll find something. Thankfully Gobi’s uselessness is made up for with a pulsing energy gun that can wrap the monster up in purple elastic bands and bring him to an almost-halt, and a sniper-rifle that finally gives the Trapper class some long-ranged abilities. 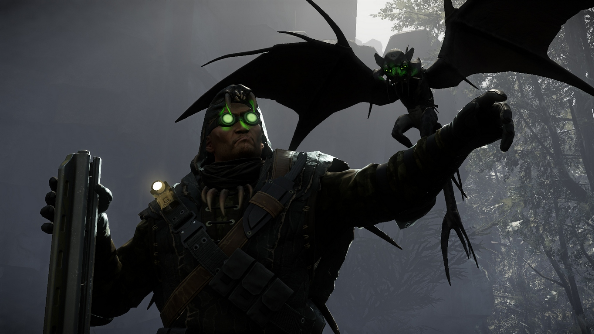 Finally we have Slim, a fly-winged, huge-eyed alien, who is the poorest of all the new hunters. He’s a medic completely unsuited to combat, with no real offensive abilities whatsoever. His leech gun will sap a tiny amount of health from the monster and help reduce the cooldown on his heal burst. Dispatchable healing bugs will chase after allies and heal them up or revive them, making them the most useful of all his abilities. Slim can use a grenade launcher to fire a spore cloud that prevents the monster from smelling the Hunters. However, generally if you’re in range to use the grenades, the monster can see you anyway, making them pretty useless.

The Behemoth and the four new hunters are available from April 30th, and come at an astonishing price. The Behemoth is £11.99, and the Hunters can be picked up in the Hunting Season Pass for £19.99 or bought individually for £6.19. Honestly: this is DLC pricing gone mad. The Behemoth is really great fun, but paying another third of the game price again for him just isn’t good economics. The Hunters are certainly less appealing, and so the £6.19 for each of them seems even more off putting. Heavy discounts in a Steam sale may bring these prices to acceptable levels, but not one of these characters is vital enough to the Evolve experience to worth breaking your wallet over.

If you don’t want to pay up, remember: even if you don’t have the DLC, you’ll still witness it. You can play alongside other Hunters you don’t own, and fight the Behemoth if another player picks him. And then there’s the free DLC that will release alongside these characters: two new maps in the form of Broken Hill Mine and Broken Hill Foundry, that are wonderfully industrial, filled with nooks and crannies, leaking pipes and flickering neon signs. They do a lot to begin to rectify the problems I had with the samey map design in my review. And if you fancy Evolve as a bit of an esport, you can watch your friends play games in a new Observer mode that sets the action in third person, and displays stats such as the monster and hunters’ win chances in a percentage. Fun little changes that come free to all, and are most certainly welcome.