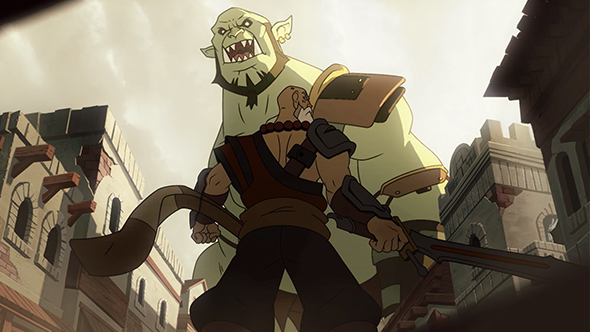 Humanity, pushed to the brink of annihilation by a race of giant beasts, is now forced to fight back in desperate battle for their own survival. Yep, there’s no denying that Extinction sounds a whole lot like Attack on Titan, but the game does have its own spin on giant slaying, and it’s not just the fact that the giants in question aren’t just giant nudists. A new story trailer is here to break things down.

The heroes are the Sentinels, who fought against giant beasts known as Ravenii in ancient times. Those heroes became myths and legends after the fall of the creatures, at which point humans turned to fight themselves as we are wont to do. Until, of course, the Ravenii come back.

Now people have been pushed back into the land of Dolorum, and as you start to fight back efforts are being made to understand the Ravenii to turn their alien tech against them. You can get all that with dramatic voiceover and lovely 2D animation in the full trailer.

Extinction will release on April 10 across PC, PlayStation 4, and Xbox One. The actual monster-slaying gameplay sounds pretty interesting, and there’s both a charm to its aesthetic and obvious appeal in its setting. We’ll see how it all turns out in just under a month.