Facebook once made a lot of money from casual games built into its desktop app, such as Candy Crush, and Zynga’s FarmVille. That cash cow has largely dried up, with mobile now the preferred platform for casual gamers.

Featuring close integration with Unity, one of the most-used game dev tools in the world, Gameroom is Facebook’s re-entry into PC gaming, with a clear focus on the casual scene. We’ve known it’s been in the works since May, when Facebook announced it under the name Facebook Games Arcade, and in August, we heard the collaboration would go further, with Facebook becoming a new build target for the Unity editor.

You can download Gameroom right now here. We’ve checked it out and there’s a wide range of games available, including slot games, board games, match threes and trivia quizzes. Most of them are free-to-play but layered with microtransactions to advance progress or unlock skins and weapons. In the more traditional genres, you’ll find strategy games with names like Game of Castles and War of Prongs, and so on. Clash of Kings is there, alongside Birds who are Angry in various settings.

We had a quick go at a shooter called Blood Strike Latino – seriously – with sounds, weapon models and maps that will feel eerily familiar to Counter-Strike players. Hot take: it wasn’t great. 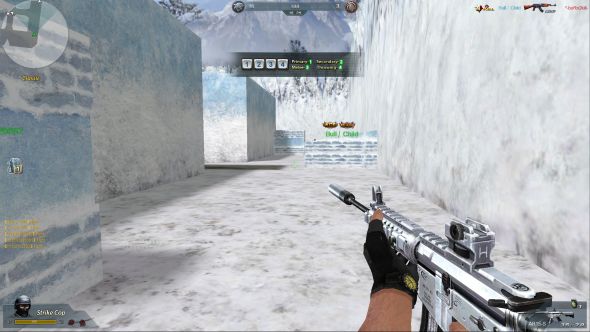 But, fine. There’s a huge market and player base for casual games and Facebook are clearly hoping to bring some of them back to PC with Gameroom. With Steam’s dominance in premium games, this makes sense as a way to launch a rival platform. If they ever directly compete, hey, competition usually works out well for the consumer.