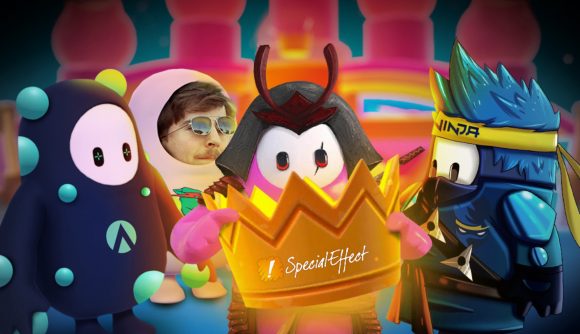 Fall Guys is big, and everyone wants in – including every gosh-darned brand on Twitter. The Fall Guys team opened up a skin contest two weeks ago, promising an in-game skin for whichever brand would pledge the largest donation to the accessibility charity Special Effect. Now, the drive has come to a close, and the winning bidders are Tyler ‘Ninja’ Blevins, Jimmy ‘MrBeast’ Donaldson, Aim Lab, and G2 Esports.

The four names teamed up for a $1 million USD donation to Special Effect a few minutes before the close of the contest, and the Fall Guys Twitter account confirms that “we will include four costumes as a special thank you to the amazing people that made this possible”. The artists at Mediatonic will be working with the winning bidders directly on the new costumes.

The previous high bidder had been YouTube channel FGTeeV, with a pledge of $510,000 USD, so the bids had already been getting hot. Prior to that, Aim Lab and Ninja had teamed up for a $500,000 joint pledge, but it seems they had to bring in some additional muscle to secure the top bid. And by ‘muscle’ I mean ‘cash’.

At the very least, Fall Guys has successfully funneled the unending thirst of Twitter brands into $1 million worth of charity good, which is the dash of hope our corporate nightmarescape needs.

Probably the spiciest team up since The Avengers??????https://t.co/Q2G3h9UyDh