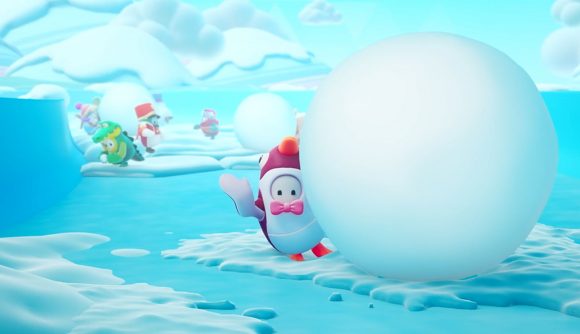 We’ve just been treated to our first proper look at Fall Guys Season 3 at tonight’s Game Awards show. The battle royale game’s upcoming next season was teased earlier this week by developer Mediatonic on Twitter, with an early peek at one of its zany new levels. But now we know it’s adding new snow-themed costumes, levels, obstacles, and more, and is headed the game’s way December 15.

Mediatonic previously teased a Season 3 level, asking: “Can you remember Bert the Pegwin?” quite emphatically on Twitter. That was alongside some footage of a suitably seasonal-looking map and a penguin-style bean barging around, doing what Fall Guys beans do best. The studio also explained that, “on this level, you earn points for your team while you’re carrying Bert”.

Oh, and it added that: “You don’t ‘yeet him off a cliff’ and he isn’t ‘an egg with legs’ lol” with a facepalm for effect. Too right. Poor Bert the Pegwin.

The most wonderful time of the year for the @FallGuysGame World Premiere of Season 3! ❄️ #TheGameAwards pic.twitter.com/l0K5bTEY0L