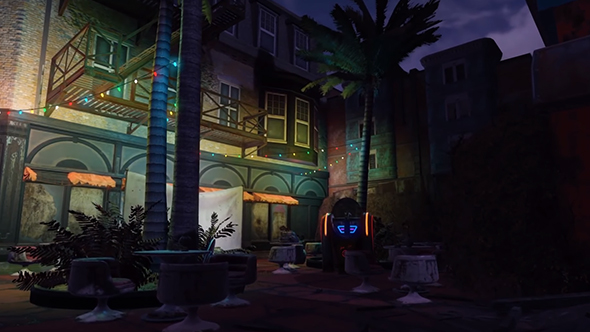 Florida might already be too close to a post-apocalyptic wasteland for comfort, but we’re about to see it truly ruined thanks to an impressive looking new mod. Fallout Miami brings the city to ruined life in Fallout 4, and a new teaser trailer offers an exciting glimpse at what’s coming.

Dig into the best RPGs on PC.

Fallout Miami is set to be similar in scope to the game’s bigger expansions, with an in-game map “slightly larger” than that of Far Harbor. The story is set near the same time as Fallout 4 itself concerns “the ideological struggle between Order and Freedom,” with a variety of factions newly created for the mod. Similar to the official DLC, it’ll also let you take your existing character directly into the new content.

The map is split between seven districts, hitting the highlights of the real-world geography while taking some creative liberties. Locations range from the industrial bottling plants to high class resort casinos, nightlife locales, and retirement communities.

There’s a surprising amount of colour present in the early imagery – at least compared to Fallout’s usual palette. It’s all appropriate for the neon typically associated with Miami, with fun touches all the way down to the Ghouls cruising the beach with inflatable toys.

No word on when it’s coming just yet – it’s obviously a fan project, so the team don’t want to commit to unrealistic dates – but can keep an eye on the mod’s progress through the full website. With new art, music, weapons, and story, it’s a massive undertaking that should make an excellent addition to Fallout 4. And without relying on existing assets, it’s unlikely to meet the same fate as the Capital Wasteland mod.