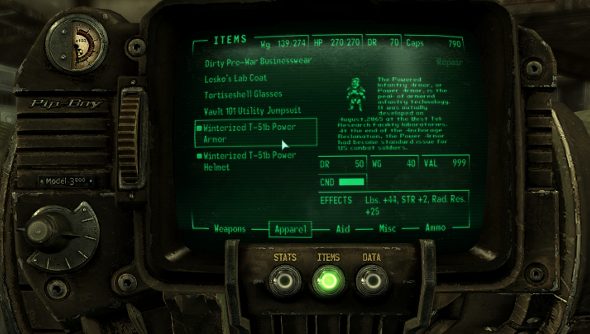 It’s a rare game that gets my attention with special edition content, but Fallout 4 is undoubtedly that game. Bethesda mentioned the impressive, sort of functional Pip-Boy replica when it unveiled Fallout 4, and now it’s selling the Pip-Boy Edition on the Bethesda Store, which comes with a few other things to boot. 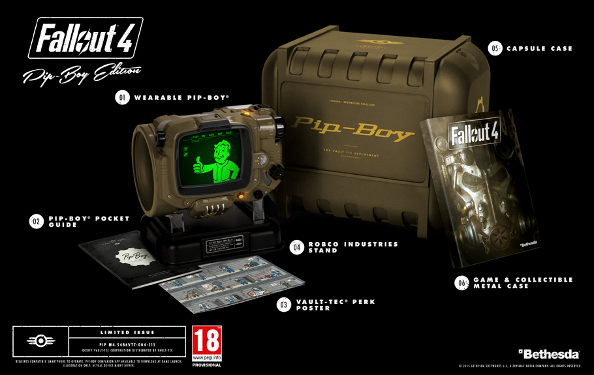 With the Pip-Boy Edition you get the game itself, of course, a Pip-Boy replica that you can slot a smartphone into and then slap on your wrist, and illustrated Pip-Boy Pocket Guide, a Vault-Tec perk poster and a beefy power armour crate to cram everything into.

Obviously the Pip-Boy itself is the main draw here. It comes with a stand, if you want to put it on a shelf for all to see, but you’ll probably want to play with it first. It’s got rotating knobs, lights, and when you shove your smartphone in it, with the Fallout companion app, you’ll be able to manage your inventory, perks and other stuff you can normally do with the in-game Pip-Boy.

I would hold off on purchasing it, though. First off, pre-orders are just not a great practice anyway, but there are also a few things that need to be cleared up. The image Bethesda is using to promote the edition is not real, and in reality the Pip-Boy and power armour crate might look quite different. Never buy something when you don’t even know what it looks like.

There’s also the question of what smartphones will it be compatible with. I use a Samsung Galaxy Note 4, which is an absolutely massive phone, and it’s not clear what size phones will need to be. Bethesda says that it requires a “compatible” smartphone, but the disclaimer is absent a list of actual devices.

Bethesda also won’t ship it outside of the Continental US, but it’s not exclusive to their own shop. Xbox One, PC and PS4 versions are on Amazon US, though it’s a placeholder and you can’t pre-order it yet, and UK retailer GAME is offering pre-orders on all three of them. Neither have a price, but it’s $120 on the Bethesda Store.