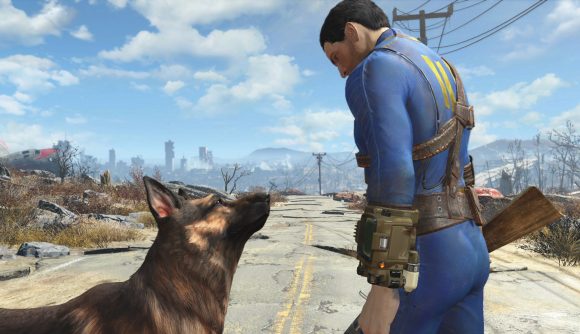 Easter eggs are a joy to find in games. If you understand the reference then you get a good ol’ chuckle, and if you don’t, you can continue on with your day none-the-wiser. Players are finding Easter eggs years after a game has been released, and some Easter eggs will be lost to the sands of time, their secret rooms, cryptic messages, and inside jokes to be hidden forever.

Burgess tweeted a Fallout 4 screenshot on his Twitter account of a bloody skeleton on the floor with a gun, ‘The Gainer’, lying next to it. We’ve included the tweet below so you can see the cryptic image for yourself. The thread goes on to explain how this image contains several Easter eggs that Burgess put in himself.

The first Easter egg is well-known to fans of immersive sims. The key code to enter the room with the skeleton is 0451, a number sequence that first appeared in System Shock and has since been referenced in many games including the Bioshock series, and the Deus Ex series.

I wonder how many people got how many parts of this? pic.twitter.com/T9kiBXvrHv

The next two Easter eggs get a little obscure. The name of the gun is a reference to Burgess’ friend Steve Gaynor as “a quiet high-five.” Gaynor has been a developer on many immersive and is the co-founder of Fullbright, a studio behind immersive sims Gone Home and Tacoma.

The final Easter egg is the bloody skeleton. The pose, where the skull is on the floor between its legs, is a reference to the 1988 cyberpunk, detective noir, Snatcher, developed by Hideo Kojima. Burgess goes on to say that he has more references to Snatcher in Fallout 3, which he also worked on as a developer.