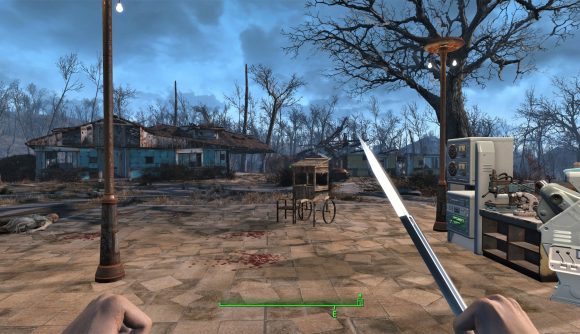 If I say 'Assassin's Creed', what do you think of? A massively popular action-adventure games series? An ancient order of jumped-up killers saying stuff like 'requiescat in pace' a lot? Hooded hooligans flinging themselves off buildings into what are surely not unbreakable carts of hay? Probably. You'd most likely also think of that arm bling they're always sporting – the hidden blades – as they're a really cool bit of kit. And the good news is they've now come to another big open-world game: Fallout 4.

Fallout 4 fan LeahTheUnknown has posted a new mod hilariously called 'A Sassy Creed – Wrist Weapons', which – yep, you guessed it – adds some “wrist-mounted weapons inspired by some other game…” Going by the pictures of the hidden blades, they look really faithful to the real deal, though naturally with a Fallout-style spin on them. Assassin's Creed hasn't yet visited the retro-futurist, post-apocalyptic Commonwealth yet, after all.

There are multiple versions included in the mod to pick from, too. There are three 'wrist spikes', which are small, more needle-like fixtures in rusty, shiny, and glass variants, as well as a concealed blade that has a metallic wrist wrapping, and a camouflaged blade, which “looks like it is camouflaged as army fatigues” and “bears a strange rank chevron”. Hmm, wonder what that could be.

If you want to make them once you’ve got the mod set up, you’ll need to head to your chemistry crafting station to whip ’em up (they sit under a ‘wrist blades’ section). It’s not clear from the mod’s description just how functional they are, but it’s probably fair to assume you’ll be able to batter opponents with them at least. And, hey, if not, they look cool. Very ‘Sassy Creed’. 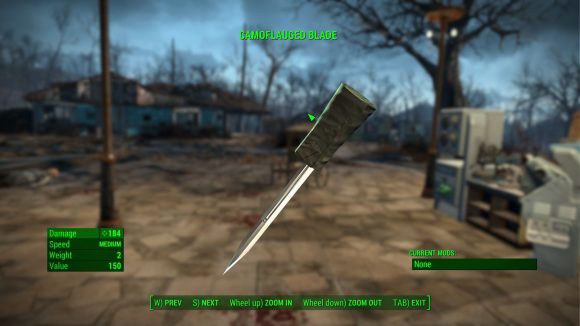 If you want to scoop the blades up for your game, head to Nexus Mods here. We also have a rundown of the best Fallout 4 mods you might find handy, or you can grab the game on Fanatical here if you don’t already have it in your collection.