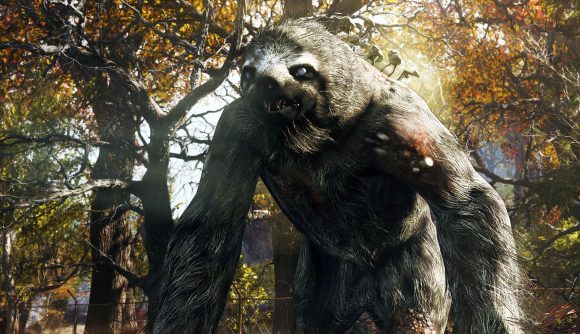 Earlier this week, Fallout 76 developer Bethesda unveiled the MMORPG’s content plans for the year ahead. Among a bunch of other events and features headed to the Wasteland, the Fallout 76 2021 roadmap revealed its winter update will bring a highly anticipated feature to the online RPG game: CAMP pets. Now, the devs have revealed a bit about how these will work.

In a Reddit AMA (‘ask me anything’) following the roadmap’s reveal, one fan asked if the Fallout 76 folks could share insight into how the CAMP pets will work when they arrive this winter. “We have some fun things in the works for pets,” design director Mark Tucker responded. “Over time, we want to provide a wide variety of different types of pets that you can customize and have both in your CAMPs and Shelters.”

Tucker explains that, initially, the devs will be offering dogs as an option for CAMP pets, but then others will follow suit – first cats, and then they’ll “go from there”.

It’s not clear which other critters they have in mind following cats, but if there are any particular pets you’d love to see in your CAMP, it sounds like it could be a distinct possibility they’ll make it into the game if you let the devs know – “suggestions for other pet types are welcome!” Tucker adds.

Some fans naturally jumped in to make some suggestions, like a baby megasloth, deathclaws, bloodbugs, possums, Boston terriers, and more. You can catch the full Reddit thread here if you’re keen to read more, and be sure to check out the Fallout 76 2021 roadmap at that link if you want to see what’s headed to the game over the rest of the year.