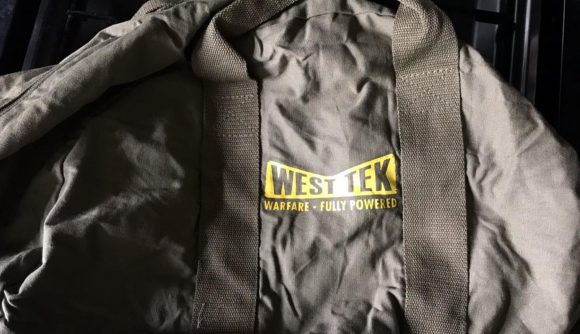 June 14, 2019 Fallout 76 players are finally starting to get their canvas bags.

The Fallout 76 Power Armor Edition was supposed to come with a canvas bag. When players who’d pre-ordered got their pricey deluxe version in November, they found that the ‘canvas bag’ was actually low-quality nylon substitute. Some Bethesda support workers responded in less than understanding terms to people who wanted a replacement. People found out that influencers got free canvas bags at an event. Eventually, Bethesda offered a proper replacement programme to get actual canvas bags to players.

Now, the replacement bags are finally here. The Fallout 76 subreddit has filled up with players announcing that they’ve gotten shipping notices for the bags, and a handful – presumably those close to the distribution center – already have bags in hand. There are plenty of images out there, and the new bags look nice enough.

Please, for the love of all that is good and pure in videogames, let this be the last time I ever have to write the words ‘canvas bag.’ I’m begging here.

Realistically, this is destined to be another horse armour – a grievance that game fans will turn to a joke, yet never quite let go of.

The collector’s edition was hardly the only disappointment with Fallout 76, but news on plenty of notable updates came at Bethesda’s press conference this week. There’s a battle royale mode called Nuclear Winter, and a story-driven Wastelanders update that’ll add human NPCs to the game.

The Fallout 76 launch was an absolute comedy of errors – only partly due to the quality of the game – but hopefully we’re in the start of a new era for online Fallout.