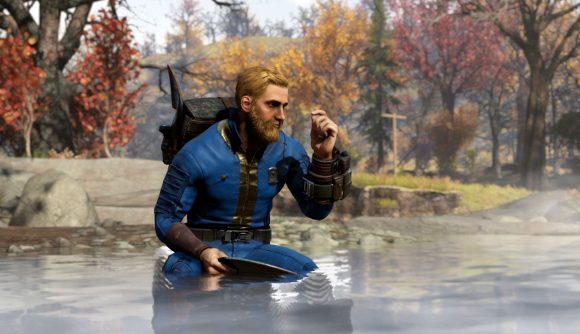 Sure, Fallout 76 gets plenty of exciting developer-created events and goodies, like the recent Locked and Loaded update, but its fans are also equally behind some of the MMO's most astonishing creations. One such example is a recent in-game cooking contest a band of fans put together which, in its clever production and high-octane competition, easily rivals the thrills of shows like MasterChef or Iron Chef.

As spotted by Polygon, earlier this week Fallout 76 fan group ElGatoPub ran an in-game cooking contest called 'Clawed', which it streamed on Twitch (below). The format – like the best cooking shows – saw several contestants pitted against timed rounds, themed on certain meal courses: an appetiser round asking for an appetiser and a beer, an entrée round (main course and beverage), and a final dessert round (dessert and tea). These had to be completed in ten, 15, and five minutes, respectively, with contestants fighting to get their entries plonked on the judging table first.

To judge the contest, ElGatoPub put together lists ranking each and every dish and drink recipe in the MMORPG, with the scores allocated reflecting how tricky they are to prepare – for example, if they contain ingredients only found by slaying Fallout 76's biggest, baddest beasties.

Plus, judging criteria – which you can see on-screen at the 22:32 mark – also factored in things like total completion of the tasks, contestants’ attitude, quality (that is, having all entries be of the highest, five-point tier), and “extra credit”, which contestants could rack up by beating pop-up challenges. The neat twist is the organisers additionally asked the aspiring top chefs to incorporate a secret ingredient.

That’s where the similarity to cooking shows ends, though. As you can see above, contestants were then left to head into post-apocalyptic Appalachia to track down their ingredients, harvest choice ingredients from bosses and dungeons, and get cookin’ – all while kitted out in chef’s outfits and hats, of course.

Rules allowed contestants to fight each other over limited resources if need be – but the only weapons allowed were tenderisers and rolling pins. Naturally. The judges also got into the spirit by assuming demanding, appropriately roasty judging styles, which tied the whole thing together.

The event is just incredibly entertaining and testament to the creativity of Fallout 76’s community – here’s hoping we see plenty more in the future. We all need our reality TV cooking show fix, and I can’t think of a better way to get it than this right now.