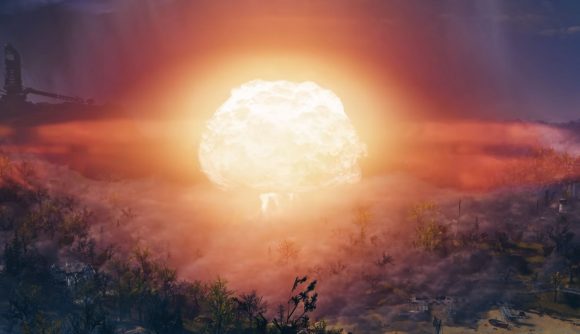 Though it’s a multiplayer experience, Fallout 76 still has a main quest with a story that will guide your experience up through higher levels and the endgame, whether you’re trying to get through it alone or with a group of fellow players. Bethesda has now detailed what to expect from that storyline, including exactly what’s going to happen at the end – though it may be more of a gameplay spoiler than a story one.

After you emerge from Vault 76, you’ll get a transmission from the Overseer, with some “secret instructions” that lead you into the main quest. She left the Vault before anyone else, and following those instructions will lead you through the earliest steps of the main story. The campaign will take you all over the map, and will require you to hit a high level by the end.

“At the end of it, you launch the nukes,” Todd Howard tells Game Informer. “The nukes are a game system, but they are also part of the main story.” Fallout 76 nukes will be part of a sort of cyclical interplayer war that makes up the endgame, and it makes sense for them to factor heavily into the main story as well.

Bethesda has already talked extensively about the game’s systems to protect against griefers, but it seems we might have been worrying over nothing. In the same GI feature, development director Chris Mayer says you won’t be running into other players all that often. “We have 24 players on one server on a map that’s four times the size of Fallout 4. There will be times you see other players, but we hope it’s not something that’s commonplace.”

The Fallout 76 release date is set for November, and you can follow that link for much more detail on what to expect. If you want to see those details first hand, the Fallout 76 beta is coming – it’s the full game, with no apparent restrictions on your progress or abilities.