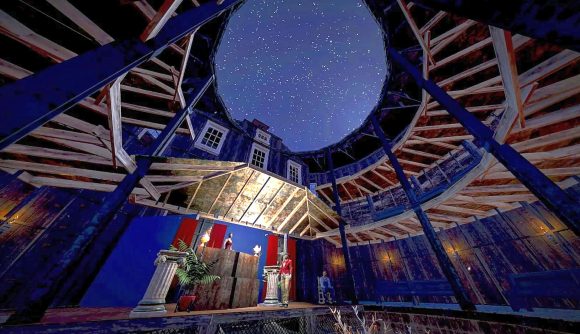 Last month, we reported on a group of players that were bringing theatre to Fallout 76, with a playhouse and kabuki venue staging scenes from plays and musicals in Bethesda’s post-apocalyptic MMORPG. Now, it seems one of those players has created another, hugely impressive venue famous from real-world theatre (remember that?) which is playing host to stories by the greatest playwright of all time.

Redditor and player Northern Harvest, who we recently spoke to about their group’s Fallout 76 plays and performances, has posted some shots of an impressive recreation of the Globe theatre in London (below). While the real thing is itself a recreation of the, er, real (Elizabethan-era) thing, it offers a really great insight into what kind of a venue the ol’ bard was working with in his time, and the Fallout 76 creation captures this really well.

It’s no doubt a challenging build, given the Globe’s broadly circular shape, but we can see the multi-storey space packed with rafters, beams, and columns, as well as seating all around its edges for those looking for a virtual night out to grab some culture. It’s also of course got a recreation of the real venue’s thrust stage and open-air roof to let the light in.

Now that Appalachia’s take on the theatre – called ‘The Grafton Globe’ – is complete, the group has begun staging Shakespeare’s pieces, with what look like some great Macbeth and Hamlet setups on show so far.

Here’s another peek at The Globe as imagined in Fallout 76:

If you’re keen to see what the group of players gets up to next with The Grafton Globe, be sure to keep a weather eye on the Fallout 76 settlements subreddit, not least because there’s always a bunch of cool new builds to check out, whatever the day.