Let’s be brutally honest: Fallout: New Vegas, by any traditional measure, is not a pretty game. It is not just the environments, or the game’s persistent, searing, yellow hue. It is also the characters and the weird way they stand, barely able to emote. It is the monsters that consistently glitch out, your awkward swimming animation, and Matthew Perry’s convictionless voiceover. It is even the city of New Vegas itself: tall and gleaming in the distance, when you finally arrive there it is just a few barren casinos along one crummy street.

Fallout fan? Get yourself ready for Fallout’s debut in VR – we love it.

Yes, Fallout: New Vegas looks scrappy. But if you squint your eyes and take a couple of small, interpretative leaps, it becomes the rare example of a game where visual and mechanical flaws add to the experience. Through its faults and quirks, New Vegas helps give definition to Fallout’s many, subtle qualities – aesthetically at least, it is one of the series’ most peculiar and distinctive games. 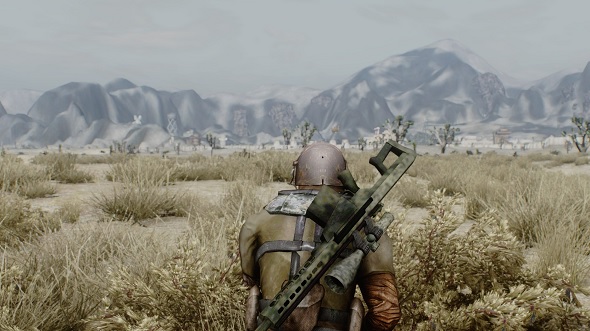 If Fallout’s landscapes are typically dead then New Vegas’ is the deadest of them all. Already a desert before it was bombed with nuclear weapons, the Mojave often looks like a blank part of the Earth that never finished loading in. Those monochromatic sands stretch on for miles. You hardly see a person as you wander them. Most profoundly of all, interiors in New Vegas are massive, empty, and silent spaces. In one sense, it is a visual shortcoming: Hoover Dam is meant to be a bustling military base, but all the characters there are standing still, in barren rooms, not saying a word. In another sense, it establishes something about Fallout’s world.

Bottle caps are now money. Las Vegas runs on barely-maintained electric generators. A military base, where you would typically expect camaraderie and activity, is quiet and cold. The introduction to Fallout 3, a destroyed Washington, D.C. set to The Ink Spots’ I Don’t Want To Set The World On Fire, helped describe Fallout’s faint, implied melancholia. New Vegas has it spread blatantly throughout. Its arid interiors and stiff populace capture and characterise Fallout’s post-apocalyptic tone. Owing to its myriad technical and visual blemishes, New Vegas is lifeless, chilly, and hapless – it makes the end of the world look convincingly unappealing. 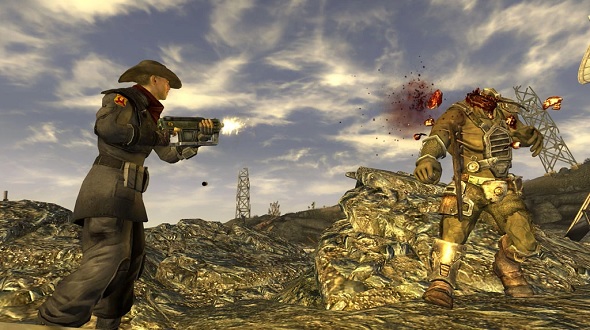 Those same blemishes lend New Vegas another, even more tangential quality to Fallout. Sure, the games in the series all have quests, exploration, and let you make up your own stories. But one of Fallout’s less explicit pleasures is finding, sharing, as well as being amused and terrified by its incredible glitches, and New Vegas has them in spades. From Doc Mitchell’s head spinning round like a clock’s big hand, to literal big hands, New Vegas is filled with funny, sometimes horrifying visual abstractions. Again, it somehow adds to the aura. What remains at the end of the world is distorted, stressed, and broken. And anyway, who hasn’t enjoyed those Fallout glitch compilations on YouTube? Or talking with friends about an insane bug that made Boone’s head disappear? Stretched limbs, jumpy animations, missing textures – this nightmarish imagery is uniquely Fallout, and common in New Vegas.

In one very significant way, however, New Vegas is different to the other, modern Fallout games.

In Fallout 3, we leave the Vault for the first time and go in search of our dad. In New Vegas, after being struck with amnesia, we have to rediscover the entire Wasteland while hunting down the man who shot us. And in Fallout 4 we are ejected from cryogenic freezing, and have to find our son. The context and situation are rewritten each time, but Fallout 3, New Vegas, and Fallout 4 all begin with the player emerging or awakening into the post-apocalyptic world and trying to find someone. At the start of New Vegas, however, we are dispatched on a revenge mission; importantly, we are not trying to find a family member. 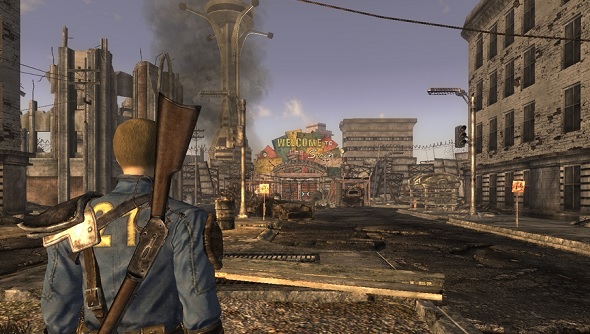 The Fallout games are ostensibly about exploring, customising, and doing your own thing. But when 3 and 4 begin with such enveloping narrative conceits – when the most important people in our characters’ respective lives are implied to be missing, likely in danger – running off to plunder Old Olney, or hanging around Sanctuary Hills to build dog kennels, becomes incongruous. These are supposed to be convincing, mesmerising worlds, but the divide between what our characters want to do and what we actually end up doing is so pronounced. When you recognise this, Fallout 3 and Fallout 4 can feel distractingly artificial.

Simply by cutting the blood tie, by making the person you are trying to find a half-remembered enemy rather than a beloved relative, New Vegas has the most cohesive initial narrative of all the modern Fallouts. Your character has some motivation, some main objective pulling them along, but it is not overwhelming. Compared to Fallout 4, when your protagonist is shouting “where is my son?! Where is my son?!” it’s easier to contextualise all your mucking around – perhaps your character is relearning their surroundings and building up their strength before they confront their nemesis. Of the modern Fallouts, New Vegas is the most accepting of player agency. 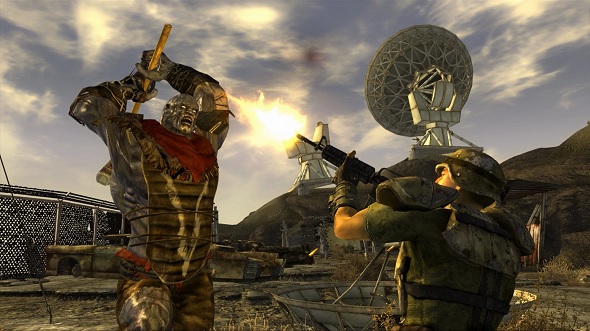 The story, the visual design, even the bugs and faults. Almost everything in Fallout: New Vegas contributes to a consistently weird and surprising experience. Using small narrative twists and aesthetic touches, New Vegas isolates and exaggerates the Fallout series’ tone. Compared to some of its RPG peers it may not seem consummately-crafted, but its messiness and technical coarseness heighten the sense of its post-apocalyptic world. Don’t just look past it – outright embrace New Vegas’ ugly veneer – and you discover one of the most cohesive open-world games of the last decade.