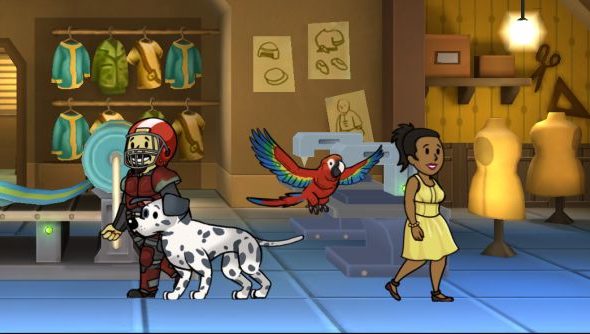 Update: Bethesda have officially announced the release of Fallout Shelter’s PC version with an esoteric infographic and brand new trailer.

Fallout Shelter is now officially out on PC, with a brand new trailer and a massive infographic about the stats of the mobile version. Info like the number of radroaches it would take to wrap around the moon (about 94 million) and the impact of deathclaws on the nail art business (very good).

If you prefer your Fallout in RPG form, here’s the best ways to pretend you’re someone else in videogames.

Meanwhile the infographic says that over 50 million people have had a go, with over five billion sessions. From there the stats get … a little stranger, and I’d recommend checking them out yourself. Particularly if you’ve ever considered recreating that one bit from the Matrix where Neo dodges everything.

Original story:The most played Fallout game ever made is making its way to PC. The massively successful mobile game from a classic franchise (who would have thought, eh?), Fallout Shelter. Bethesda haven’t made much of a fanfair about it, but it’s available now exclusively via the Bethesda launcher for not a pennycent.

If you’re unfamiliar with it, Fallout Shelter is essentially a dark humour management game about building a Fallout vault for survivors to thrive, breed and prosper in. Or, y’know, watch them all die horribly to radroaches. Here’s a trailer:

It took over the world for about two days before fading into obscurity a bit. Since then it has reached version 1.6 introducing, as seen above, quests in the latest update. There’s been costumes, jobs, characters, a bit of everything since release, so if you enjoyed it but got bored on mobile, it might have something new to offer you. Those that haven’t, know that while it does offer microtransactions, they’re apparently not required ot have a good time.

To grab it you need a Bethesda account and the Bethesda launcher, which you can grab through the download button in the upper right of the official site. According to NeoGAF, options are fairly basic, as you might expect, but Shelter runs well.

Oddly, Bethesda don’t seem to be giving it too much of a fanfare. The official Fallout Twitter hinted at it, but otherwise they’ve been silent. This could indicate it’s coming to Steam for a full release at some point, or that they’re just waiting to see if there are any major problems before giving it a full blast.