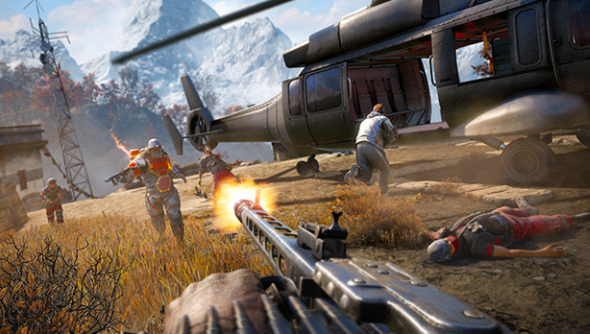 Far Cry 4 looks a bit like Skyrim, sometimes, when you’re picking flowers on the slopes of an unnamed mountain. But there’s something about the quick quest loops, and probably also the shotguns, that leaves it oh so much more frantic.

And if Far Cry’s frantic now, how do you think it’s going to be once you’ve been captured, tortured and stripped of your weapons in its Durgesh Prison DLC? And then, for good measure, set against the clock?

Escape from Durgesh Prison is a permadeath time trial, designed to be “challenging” enough to test the teeth players have developed chewing on outposts in the main game.

You’ll want to arm yourself as soon as possible, using the knowledge of enemy and weapon placements you’ve gained in previous, failed playthroughs to reach the extraction point. There’ll be leaderboards.

The plot finds Ajay and co-op partner Hurk – who you’ll have found either charmingly obnoxious or obnoxiously obnoxious in the main campaign – defenceless in Yuma’s prison. They’ll need to overcome a series of Pagan Min-dictated challenges to recover their lost weapons.

The $9.99 DLC is available on its lonesome or as part of the season pass that also includes the Syringe mission, the Hurk deluxe pack, Overrun and Valley of the Yetis. But perhaps there’s still a foggy segment of Kyrat waiting to be liberated before you consider any of that.

Meanwhile, Ubisoft are umming and ahhing over the future of Far Cry. Should they plump for vampires or Vietnam?