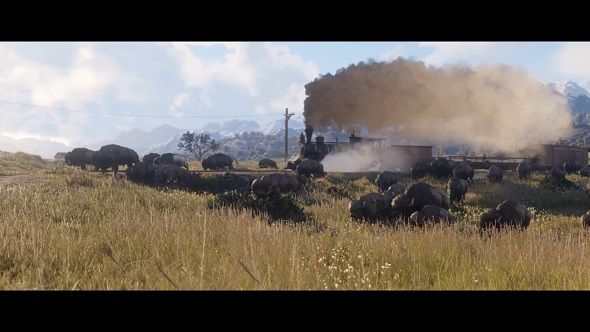 The next Far Cry game might be a Spaghetti Western set in 19th century America, and might launch this coming September, according to a new rumour.

Roam some prairies in the best sandbox games on PC.

It all started last week, when the Great Falls Tribune reported that a Montana church “will soon be featured in an upcoming videogame”, which they say “will be released in September.” Last Monday, film crews led by producer Jeff Guillot used a drone to film a fight between two men as a train passed by. The Tribune says the footage “mostly will be used for promotion of the videogame”, suggesting a live action trailer.

The Tribune also has comment from Guillot, who says “This is a sequel to an existing global franchise” and that it will take place “in an imaginary location”. In an earlier version of the article, cited on NeoGAF, it seems this location was named Hope County (the article was updated two days after its initial publication).

Given the church’s history (it once served family members of the late Sioux chief, Sitting Bull), it didn’t take long for NeoGAF to think of a 19th century Western setting. This understandably led many to think of Rockstar’s Red Dead Redemption 2. Hope County would be a different setting, however, and Kotaku’s well-informed Jason Schreir further cooled the Red Dead rumblings before finally saying “you guys are good!” when the Far Cry 5 theory emerged.

It’s also worth noting that Guillot has previously worked with Ubisoft on a live action trailer for Far Cry Primal, as WCCFTech point out. Finally, Ubisoft polled players in January 2015 on possible future Far Cry settings, with a Western as one of the options (alongside dinosaurs).

Red Dead Redemption 2 is also due for a release this autumn, with October 3 a possibility according to a marketing leak. That would put two triple-A Western sandboxes within a month of each other.

Of course, the industry is in the grip of pre-E3 jitters right now, and this could all turn out to be a red dead herring. We reached out to Ubisoft for a statement, and were told that they don’t comment on rumour or speculation. If there’s any truth to the September release, though, expect a reveal at E3.