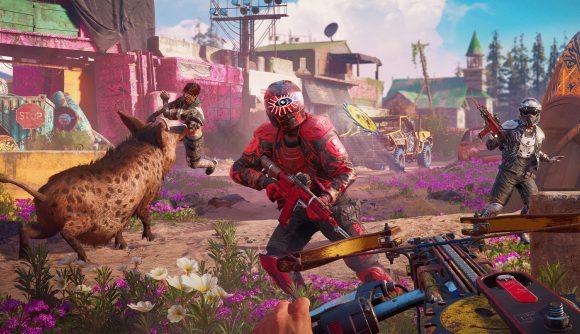 Ubisoft plans to release five triple-A games by March 31, 2021, and in broad terms that plan is unchanged from the company’s last financial report. Today, the publisher has provided some additional detail on what to expect from its impending lineup, and warns that one of those five titles might be delayed past its current launch target.

The publisher has one unannounced triple-A title due out this fiscal year, which ends March 31, and it’s from one of Ubisoft’s “biggest franchises”. Industry insiders are confident that this will be the next entry in the Far Cry series – so sorry, Splinter Cell and Prince of Persia fans, those long-standing rumours don’t look to be panning out any time soon.

Three of those five triple-A games are scheduled to launch between October 1 and December 31, 2020, but only the Assassin’s Creed Valhalla release date has been confirmed for that window. The other two will be out between January 1 and March 31, 2021, but we don’t know how the other releases will break down just yet.

Besides Assassin’s Creed Valhalla, Ubisoft has announced Watch Dogs Legion, Rainbow Six Quarantine, and Gods & Monsters – plus, of course, the unannounced (Far Cry) game. Smaller titles, like the upcoming Roller Champions, are not counted among these triple-A releases.

Ubisoft warns investors that one of those five games might slip to the next fiscal year, and says that it has three to four games planned for the April 1, 2021 to March 31, 2022 window. No specific titles for that window have yet been announced, but we do know that Ubisoft’s far-off lineup includes games like Beyond Good & Evil 2 and Skull & Bones.

Ubisoft Forward will bring us plenty of news on the publisher’s incoming lineup of games.