Ubisoft appear to have taken the ‘throw bait, attract leopard’ mechanic from Far Crys 3 and 4 and really ran with it in their world premiere of Far Cry Primal’s gameplay at The Game Awards. Consisting almost entirely of scenes featuring various Ice Age men being mauled to death by an array of Ice Age beasts, Far Cry Primal is already looking like a significant departure from the franchise’s core FPS gameplay.

We’ve had a go on it and everything – see our Far Cry Primal hands-on impressions for more.

In Far Cry Primal, players take control of Takkar, a Beast Master who is able tame and control the animals that inhabit the land of Oros. Ubisoft’s gameplay trailer and walkthrough shows players calling on various beasts during combat, including a gargantuan bear, a fierce sabre-tooth tiger, a dire wolf and… an owl.

Alongside the gameplay trailer, Ubisoft have put out a video walkthrough showcasing some of the game’s features. The walkthrough confirms that crafting is still a huge part of the game, as are random aerial attacks by birds of prey – so there’s plenty of that to look forward to. We still don’t know much about Oros itself or the narrative backdrop of Far Cry Primal, but this gameplay looks fresh enough to pique some positive interest for the franchise’s next installment. 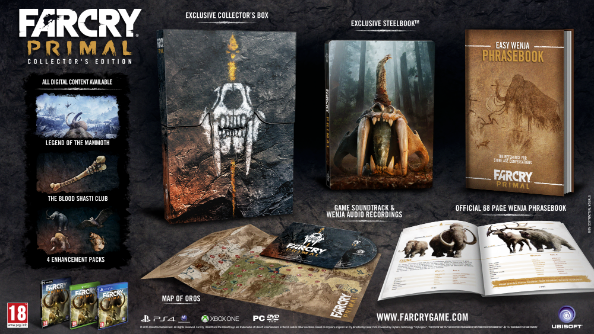