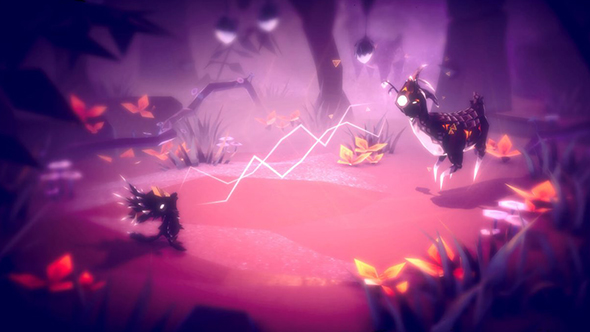 2017’s been a rough year for a lot of people, for a lot of reasons, and there’s only so much some joyful escapism can do to help. But we’re almost on the other side, and this five minutes of joyful footage from the upcoming platformer Fe is just the kind of truncated joy I needed to make it through this last weekend.

Keep an eye on the biggest upcoming PC games of 2018.

Narrated by the joyfully dulcet tones of creative director Hugo Bille, the IGN First footage shows our tiny fox hero Fe working to free a giant deer from the clutches of a mysterious evil. That means singing to make friends with nearby animals, which will lead to new items and areas. Fe’s got a glide ability that looks a little Breath of the Wild-inspired, letting you gently float down to interesting points in the distance.

The little quest shown off here has Fe freeing the giant deer from its prison, then climbing up the creature and singing to it to make pals, like some beautifully nonviolent inversion of Shadow of the Colossus. Singing to the big guy nets you a new language to sing in, which will let you speak to more kinds of flora and fauna as you explore the world.

Fe was announced at E3 earlier this year, as part of the EA Originals program alongside A Way Out. Fe is due out sometime in 2018.