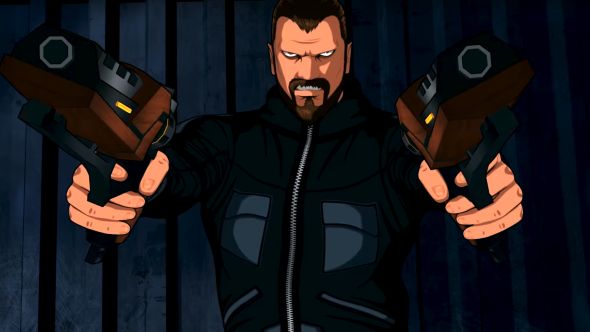 Yes, there’s more to Fear Effect than those ads you might remember from the early 2000s, and the follow-up to the original pair of PlayStation games is now available. Fear Effect Sedna is a new perspective on the series in more ways than one, built by French indie studio Sushee with a isometric tactical viewpoint.

We spoke with the developers about their Fear Effect revival.

Kickstarted back in 2016, Fear Effect Sedna is the product of the Square Enix Collective, allowing an outside studio to take a stab at the originally Eidos-owned series. The tactical perspective lets you use the special abilities of various heroes to make effective use of your team, and the titular Fear Effect system powers up your damage while making you more susceptible to injury while your characters are frightened.

Co-written by the original writer of the series, Sedna brings back a franchise we haven’t seen in nearly two decades. Early impressions have been mixed, but you can find out for yourself how things turned out with the game now available on Steam, and a launch discount brings the price down to $17.99 / £14.39 / €17.99.

Developers Sushee are also working on a full remake of the original called Fear Effect Reinvented, which is due to release later this year.

Square Enix and Developers Sushee describe the game as “an entirely new chapter” in the Fear Effect series. Co-written by the original series’ writer, the game follows four familiar faces – in the form of Hana, Rain, Glas, and Deke, as well as newcomer Axel – into isometric action puzzler centered around Inuit mythology.

The game’s combat will include a paused tactical mode to let you get the most use out of each characters’ unique weapons. The trailer, which you can watch above, shows off some of that combat, as well as some beautifully animated cutscenes.

Sushee are also working on Fear Effect Reinvented, a remaster of the original game. Both Sedna and Reinvented will be available on PC, Xbox One, PS4 and Nintendo Switch, with Reinvented arriving sometime in 2018.