Fantastical MMORPG worlds are filled with wondrous places to visit , but when it comes down to endgame raiding, a lot of time is spent staring at some giant’s ankles. While there’s little else that can match the relief and elation of finally downing a towering raid boss a hundred times your size, the thrill of the hunt can dull if it’s just yet another gargantuan beast you’re cutting down to size.

The Final Fantasy XIV team has shown it has grander ambitions for its boss designs. Not only are the encounters audiovisual treats full of delirious special effects, they also have clever and challenging mechanics weaved in that elevate them beyond simple ‘tank-and-spank’ slogs. They aren’t just a gauntlet of lengthy health bars to chip away at until the target topples over – they’re complex multi-part ordeals.

Of all the raid bosses in the game there’s one that stands head and shoulders above the rest. It’s the fight that concludes a significant chapter of the Stormblood expansion storyline – one lauded by players for how it combines story, mechanics, and music to make for an incredible whole. To understand why the encounter with Tsukuyomi has had such a resonating effect it’s important to lay out the context. Naturally, there are spoilers for Stormblood and it’s updates below.

Yotsuyu is one of the main antagonists in the Stormblood storyline. For the majority of the game, she’s the tyrannical ruler of the region called Doma, which players venture to in order to free it from the Garlean Empire.

Yotsuyu’s hatred of the kingdom is fuelled by how poorly it treated her in her younger years. She lures players to Doma Castle so she can collapse it and kill everyone inside. However, everyone escapes except for Yotsuyu and a player ally called Gosetsu. 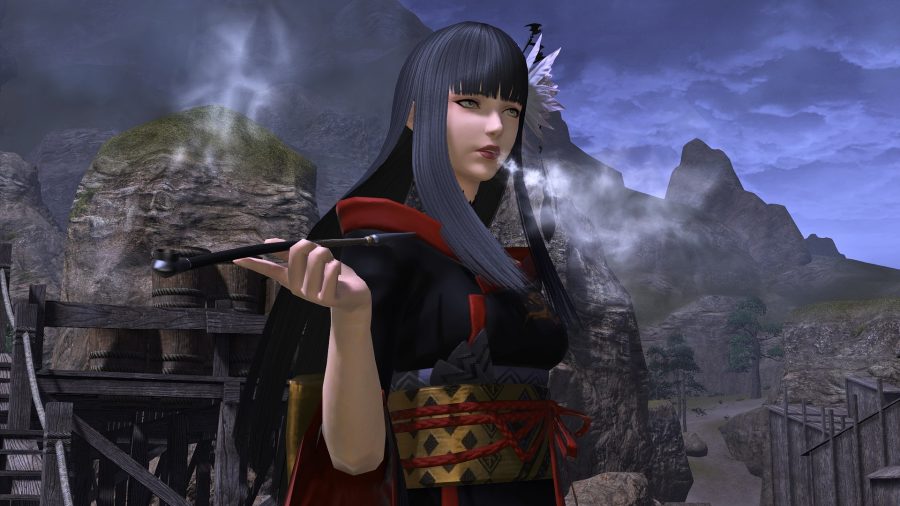 It’s this incident that causes Yotsuyu to lose her memories. Gosetsu nurses her back to health on a nearby island and then they return to the player’s group. The new Yotsuyu is a kind person, innocent even, but she eventually gets her memories back. At this point she finds herself conflicted between the person she is now and the atrocities she both experienced and committed in the past. “She’s able to see both sides,” director and producer Naoki Yoshida tells me. “And being able to get that across was very important for us. We wanted to communicate that story within the battle as well.”

She’s able to see both sides. To get that across was very important for us

The climactic battle between Yotsuyu and players sees the former ruler succumbing to her inner turmoil and morphing into a magical being – or Primal – named Tsukuyomi. Final Fantasy XIV players have encountered many similar beasts in the past but this one is visibly charged with the theme of the scenario. “We started with her two sides. The new moon, the dark side – and the full moon, the bright side. Having that as the focus for the battle, and then bringing out her inner conflict within the battle,” Yoshida explains. That duality is clearly represented in her design, with the skin on the left side of her body appearing pale, while the skin on the right is much darker.

As for the fight itself, it has three different phases, forcing players to employ different strategies as they adapt to different mechanics on the way to victory. The first is a fairly comfortable introduction – a few moves to dodge and group-wide blasts of damage to heal through – but the second phase is perhaps the most overt in bringing out that internal conflict within Yotsuyu. 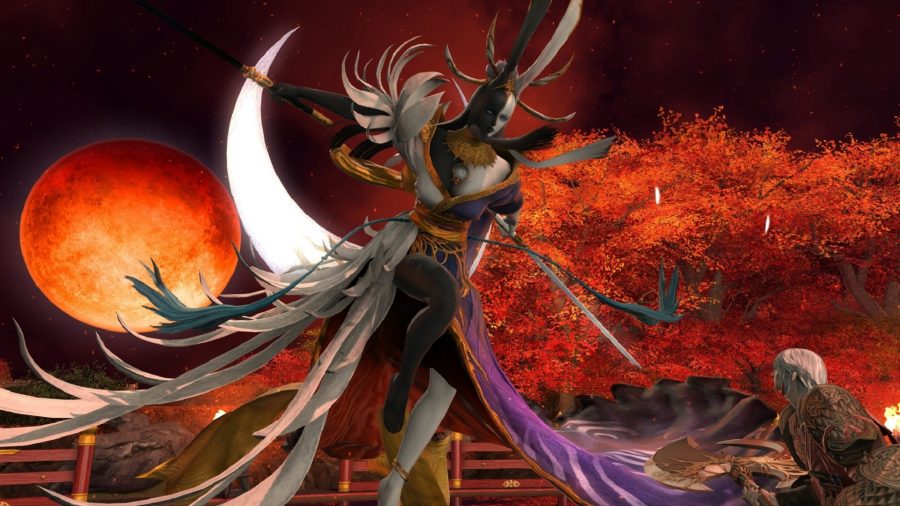 It starts when she collapses in the middle of the arena and is assailed by an array of ghostly figures from her past. These spectres include figments of the villagers she’s wronged in the past, as well as the parents who mistreated and abandoned her as a child. Players must work together to draw together these enemies and defeat them within a specified time limit before Yotsuyu’s suffering reaches a critical level and wipes out the entire party.

Not the boss of me

During our chat, Yoshida jokes about a friendly rivalry between newcomers and veterans of the battle planning team. Each tries to improve upon what the other has created before when designing encounters, which has led to some bold and adventurous raid boss designs. Hopefully that competition sparks many more battles like this in the future.

“That was also the battle team’s idea. They wanted to do it,” Yoshida says. “But, when I first wrote that idea, I was thinking, ‘Ok, so you want to bring out Yotsuyu’s parents, you’ve got this old guy and this old lady, so you have to come up to them with your axe and just start swinging your axe at them? I don’t know if the players are going to want to do that!’.”

Sure, it may have a touch of the ridiculous to it, and is essentially a time-restricted burn phase that countless raid bosses have featured in the past, but the reasoning surrounding it is what makes it effective. That feeling is multiplied in the final part of the phase when the spectre of the Garlean ruler Zenos appears with one final attempt to crush her spirit. Swooping in at the same time, however, is the spirit of Gosetsu – a force of good that has shown Yotsuyu the compassion and kindness that she lacks in her life. The two dramatically clash over Yotsuyu and so players must rush in to assist by defeating the final spectre of Zenos to free her. 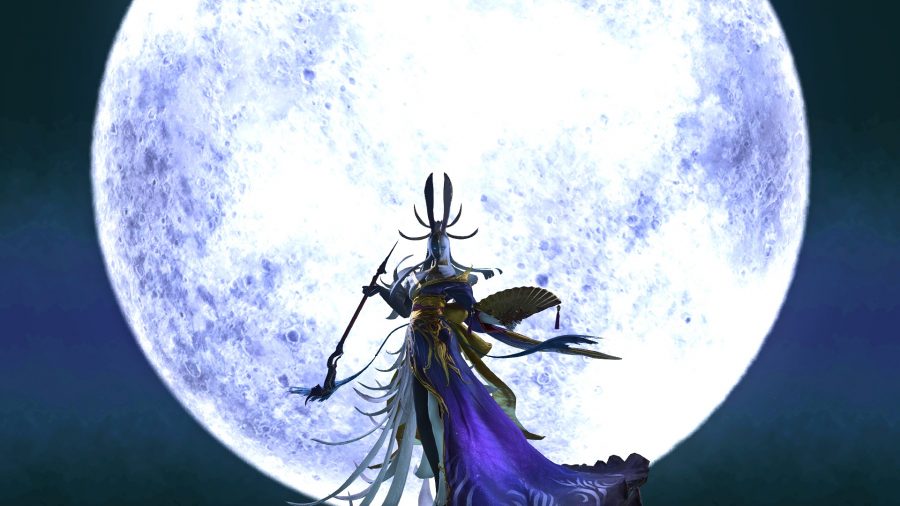 One of the reasons the fight may have resonated so well is because players feel directly involved with the outcome of the story. Final Fantasy XIV’s consistently strong writing has made Yotsuyu’s plight engaging in cutscenes, but in the encounter with Tsukuyomi you watch it develop right in front of you. Then the Final Fantasy XIV team skilfully repurpose classic MMO boss mechanics to emphasise the players’ parts in the story further. For once, it’s them fighting for her psyche, them trying to eliminate the negative thoughts.

Role a six: The best RPG games on PC

Helping to heighten the drama of the encounter is the work of Final Fantasy XIV’s composer, Masayoshi Soken, and his gorgeous and absorbing score Tsukuyomi’s Theme. On a number of times, when attempting to clear the harder ‘Extreme’ version of this trial, my party members have been heard humming the twinkle of piano keys as the fight transitions into the third and final phase.

“When Yotsuyu appears during phase two and phase three, we started with the themes from Doma and Yanxia,” Soken says. “We actually took the chord from a different part of each song, it’s just the melody that’s a bit different. So, what we wanted to express is that side she shows, and the side that is hidden from other people. We wanted it to depict the two sides of her.” 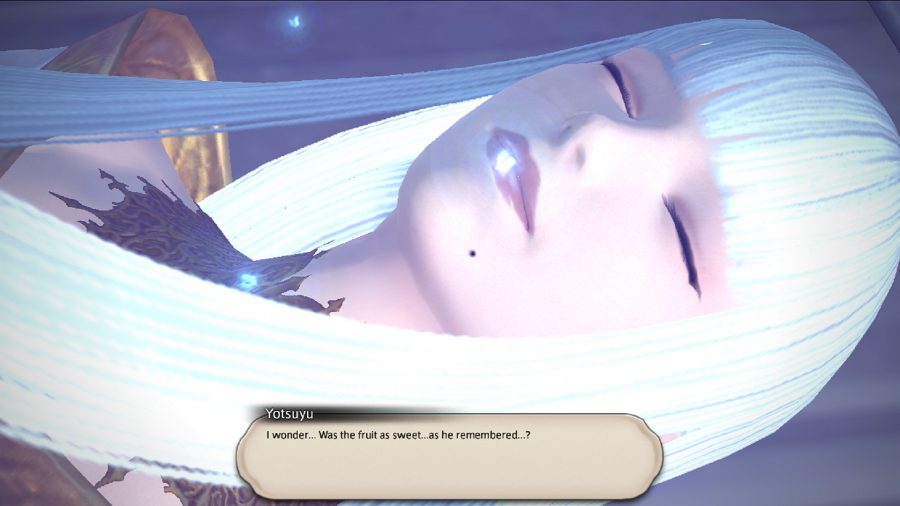 Yoshida has nothing but the highest praise for his musical collaborator, who he says spends time speaking to the scenario writers and the battle planners to get a complete understanding of the fight he’s composing for. Thought it seems the feedback he gets is easy to sum up.“The sort of common phrase that they use is magnificent and dramatic,” Soken says. “They say, ‘I did it before, but now it needs to be more dramatic and more magnificent! Can you do that?’.”

Related: Fly to a new world with the best MMORPGs on PC

Those two adjectives could absolutely sum up the final phase of the fight. The arena shifts from a mechanised exterior and into a beautiful autumnal field, leaves falling from the sky while a blood moon shines brightly. Mechanically, the fight develops further too, as players must balance a light and dark debuff on themselves to counter the expanding light or dark sections that spread across the arena floor. And so players not only have an interesting battle mechanic to get to grips with, they’re struggling to stabilise two opposing forces – just as Yotsuyu has been.

It’s clear that Final Fantasy XIV’s creators are extremely proud of how the fight came together. “When I did my final check, getting to see this marriage of the scenario, battle, and sound, I felt that it was very fitting for her, a very unfortunate character, to have this type of final curtain call,” Yoshida says. “It was a very fitting place for her a battle in. It’s going to be very difficult to try to make something that’s going to top that.”