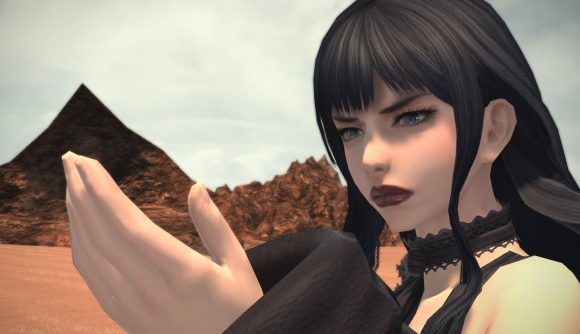 During a Final Fantasy ‘Letter from the Producer’ livestream, Yoshi-P made his stance clear on what players were doing in-game. According to Miuna, who’s part of the Final Fantasy XIV Discord translator team, Yoshi-P had this to say: “There are people using mods to take (lewd) screenshots in the game, people say I haven’t been taking a stance on this. It isn’t allowed.”

Apparently using the game to take these screenshots could cause legal issues for the game and how it’s perceived at a governmental level. “Depending on the content you publish, it goes beyond just getting a penalty from Square Enix, in some countries some of the screenshots we see are against the law. We want to avoid being asked ‘What game are these screenshots taken in? Change the data, don’t let them do this’, so I ask you to please refrain from using mods.”

After a literal earthquake in Tokyo at the end of this discussion, the conversation turned to third-party tools and how they’re used in conjunction with the game. “It is against the Terms of Service to use third party tools, please refrain from using them. There can be consequences like penalties to your account.”

However, something like Discord, a tool people use often is also a third-party tool, which creates a grey area regarding the previous statement. “But what about apps like Discord? Being in voice chat technically is using a 3rd party tool. There isn’t really anything ‘bad’ happening to the game if you use these apps, it’s not like you are rewriting data or input anything into the game, so it is hard to draw the line between tools we ‘accept’ and the ones that break the game.”

The conversation continues, “I am an engineer myself, I understand you could just write an Excel macro to read the log file after a fight is done. But I am taking a stance on this, we won’t know what you have installed on your PC, but 3rd party tools are against the ToS, grey zone is still grey, I am asking you to not use these 3rd party tools.”

So that’s that then. Please stop breaking the game and taking inappropriate screenshots because it might get Square Enix in trouble. We wouldn’t want to say bye-bye Final Fantasy in some regions – that would obviously be a shame.

In other Final Fantasy news, we all know that the FF7 remake has been delayed including on all non-PlayStation platforms. We’re all just going to have to wait a little longer to see Cloud again.