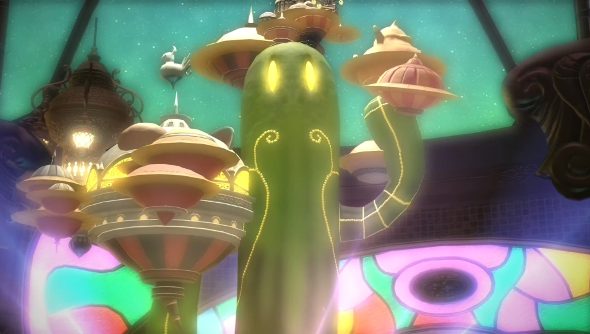 Final Fantasy XIV’s impending 2.5 patch is massive; so massive, in fact, that it’s going to be split up into three parts over the next couple of months. New story quests, dungeons, extra dungeon difficulties, a new raid, the build up to the upcoming expansion, Heavensward – there will be a lot to get through.

What’s most important, however, is the Gold Saucer, finally arriving next month with mini-games and, yes, chocobo racing.

The first part of the update drops on January 20th, with new scenarios that will lead up to the expansion and more dungeons with big ol’ bosses.

Then, next month, you’ll be able to visit the Manderville Gold Saucer, with its tests of strength and skill, Final Fantasy VIII’s Triple Triad game and chocobo racing. Square Enix has been promising the Gold Saucer for a good long time, so no doubt there are some folk frothing.

A month later, in March, the final part of the update will launch. Expect more quests along with the aforementioned flashy new raid, World of Darkness.

It’s quite the bounty. Take a look at the equally massive trailer above to see some of the new content in action.