Square Enix have run more closed beta events for Final Fantasy XIV: A Realm Reborn than you have hot baths. Or if you’ve run more than half a dozen baths, marathons. Those of us on the outside, however, have been privy to very little of its revamped fantasy landscape – but after today, you can say you’ve been witness to its gleaming temples, boats with bay windows, charging Chocobos, plentiful emotes, sweeping helicopter shots, and apparent space travel.

Gosh, there really are a lot of emotes.

Parenting is all about negotiation. Eat your cinematics, and we’ll let you watch ten minutes of character creation and running about. Oh, hang on – turns out Square Enix aren’t any of our parents. Better just skip straight to 2:00, then.

The narration is in Japanese, and though our readers seem a well-educated bunch, that isn’t necessarily a language you speak. Don’t worry, though – the MMO-literate will pick up what’s going on pretty sharpish.

The video shows off flexibility of the customisation options. Here we see a woman with cat eyes and donkey ears: 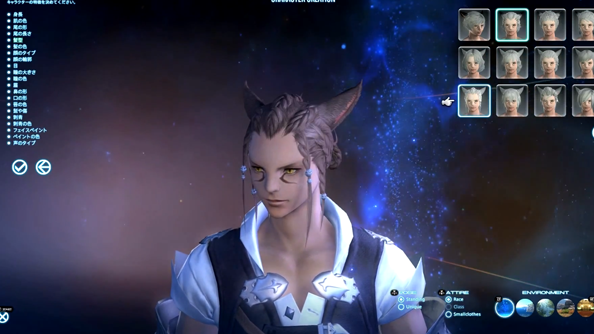 Kim judged the re-engineered Final Fantasy XIV to be a stirring turn-around back in April, and I imagine that’s still the case now. Are you sold on its pointy hats and pets yet?

Additional reporting and ears for this post by the delectable Julian Benson.