Welcome to my Final Fantasy XIV: A Realm Reborn impressions blog. The early access has just started and I’ll be playing for the majority of the weekend, and beyond. I’ll be writing down my initial impressions, adventures and other happenings as I go, so be sure to check back regularly for my latest posts. After I’ve reached the level cap and experienced a plethora of end game content, I’ll dedicate another post to my final verdict.

If you’re playing as well, check here on information on how to play with me and other readers. We’re on the (EU) Phoenix server.

The floodgates are open, and the servers are up and running. I originally had a character from the latest beta, but opted to re-roll due to the server being locked down. It’s no fun if you’re friends can’t play on your server right?

This gave me an opportunity to use a handy tool: loading up pre-saved character appearances. Since I’m a very fussy man when it comes to character creation, I didn’t have to waste my time painstakingly recreating my perfect avatar. I’ve decided to play as a Pugilist: a hand to hand specialist who excels at melee damage.

I’ve just hit level eight and have completed the initial tutorial, which consisted of a bunch of fetch quests to get you familiar with your starting city. I have to say I would much prefer a tutorial that throws you into the fray in some sort of instanced event, as it’s much more effective at grabbing my attention. On the other hand, I know the city off the back of my hand and I’m rarely using the map to help guide me.

Outside of your standard kill x and fetch y quests, there’s FATE’s. They’re a version of public quests, much akin to what Guild Wars 2 calls dynamic events. They pop up around the area and make themselves known with a unique icon on the map. They usually involve killing various waves of enemies, or a huge boss. Thanks to the explosive population in the early access headstart, they are nigh impossible to fail. I hope there are more variations further into the game.

Finally you’ve got story quests, which are fleshed out with cutscenes and voice acting. These are the driving force behind directing you around the world, leading you to nested clusters of side quest hubs.

I have to say this is one of the most smoothest soft launches of an MMO to date. I know it’s only early access, but basically anyone who is interested in playing the game right now, is playing the game right now. My server has remained online and strong all day so far, which is a pleasant experience after being privy to some terrible launches in the past. Yes I’m looking at you Diablo 3 and SimCity.

But now I’m going to contradict myself.

Just now the server blurted out a message in chat. There’s been some issues with the instancing side of the servers, which have stopped people from entering instanced story quests and dungeons. It’s done a pretty effective job at stopping me dead in one of my quest lines.

However this allowed for some carefree exploration. This game is pretty, and I mean really pretty. I found that I could easily run around a zone while completing various FATE’s and hunting logs (personalised bounty quests) and admire the scenery. Also it’s not impeded my progress either in the leveling department.

Unfortunately Square Enix had to take the servers down for a three hour emergency maintenance to try and fix the instancing problem. When they came back up, the problem wasn’t fixed for everyone, including me. I did all the quests I could in my area that didn’t require an instance, and every hunting log challenge I could find. At level 14 the day has been quite productive actually. Even with the instancing issues, the completionist in me is content at nearly 100%’ing the starting zones.

I’ll be back tomorrow bright and early, hopefully to the issue resolved. All things going well, I’ll be winging my way to my first dungeon imminently. 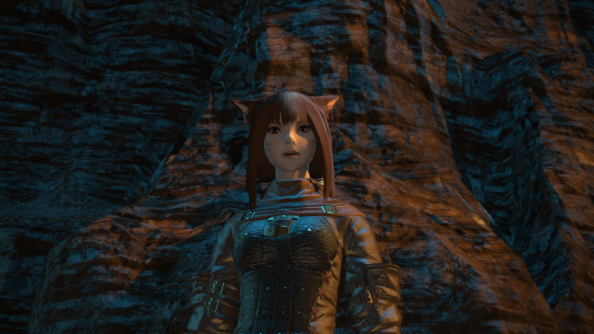 Although I’ve lost a lot of playing time with the recent bout of downtime, the server issues are largely resolved. I quickly completed the story quests that were disabled due to the instancing and managed to scramble my way to level 18. I really began to appreciate the amount of stuff to do, as it’s rather mind boggling. Here’s a small list:

If you think this is all rather overwhelming, then have no fear. You also have a little recommendations tab, which shows you suggestions of what to do based on your level and location.

I’ve just completed the first three dungeons, Sastasha, Tam-Tara Deepcroft and Copperbell Mines. Dungeon groups are a four man expedition: one tank, one healer and two dps. Each dungeon comprises of a number of mini-bosses, culminating in a big finale. Treasure coffers are awarded for slaying them, as well as being littered throughout the map. They can contain some nice loot, including Atherite gear which is typically quite rare.

I’ve been using the duty finder for all my groups. You just sign up to whichever instance you would like, it then finds you a group. While you wait you can carry on doing whatever it was you were doing and a notification pops up to tell you when it’s ready. It also has the luxury if searching for party members from other servers, so finding a group should never take long.

As for the dungeons themselves, they’ve been quite enjoyable. Plenty of varied environments and enemies keep them engaging. All the groups I’ve been with have also been quite adept at the formalities of dungeons, thanks to the earlier guild heists teaching new players the basics of pulling, aggro, mob management etc.

So far each of the dungeons have employed a nice little pattern to help you overcome the final boss. Each of the mini-bosses in the dungeon usually have a unique mechanic that needs to be dealt with in order to succeed. Then the final boss will use all of the previous mechanics combined.

As for replayability that remains to be seen. If you party up with someone who hasn’t done the dungeon before, you are rewarded with a nice experience boost. This encourages higher level players to help out those below and in need. I’ve heard that there is a hard mode for all the dungeons at the end-game, but that’s for another time.