What are the best Football Manager 2018 free agents? Unless you are a super club in the vein of Paris-Saint Germain, Barcelona, or Manchester City, it is unlikely that you are going to have enough money to go out and obtain every player that your heart desires.

The more likely scenario is that you are going to need to scout around the edges of the transfer market to fill in the squad gaps that your finances will not cover once the essential signings have been made. But, you are almost certain to find that the extra time and work you put in to find players cheaper than a Freddo bar will pay off time and again during your time in charge.

Place yourself in a new role with the best PC simulation games. 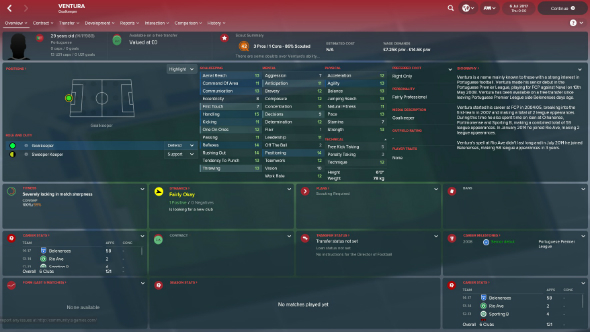 If ever a career is the very definition of mediocre then it is that of Ventura, one of the best Football Manager 2018 free agents if your squad is short of options between the sticks. Since his debut in 2008 for FC Porto, he has gone to play at senior level 121 times for six different clubs. Hardly a great return for the goalkeeping position.

However, he is not a bad player, and the fact that he has continued to be given chances to prove himself at the top level in Portugal highlights that fact. He will make a fine second or third goalkeeping option for a middling Premier League club, and at 29 you can count on his services for many a year to come.

Do not expect him to make strings of wonder saves, but do expect him to perform well enough to not embarrass himself, or your team. 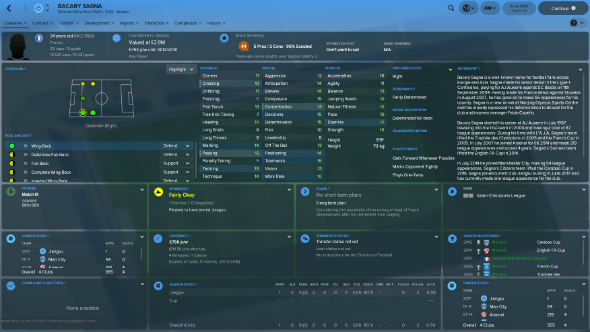 With 14 years spent at the top tier of English and French football – plus 65 caps for the French national team – in the infamously tiring fullback position, Bacary Sagna is understandably past his best. However, he is still capable of holding his own at a club at the lower end of one of Europe’s best leagues.

His pace and acceleration have gone completely, so you need to limit his forward runs to prevent him getting caught out in defence – but his stamina and fitness levels are still high enough to get him through a season if intelligently managed. 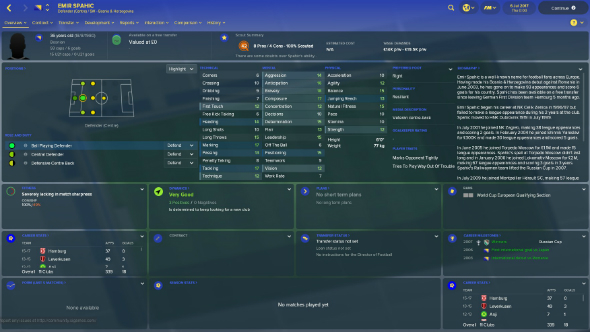 With 93 caps for Bosnia and Herzegovina, and a playing career that has thus far spanned Germany, Russia, Spain, France, Croatia, and his homeland, Emir Spahic is one of the most experienced Football Manager 2018 free agents you will find. Hamburg and Leverkusen have been his most recent clubs, which suggests he is not quite done yet.

He might be slow at 36 years of age, but he was never fast, and he still enjoys commendable stats for tackling, heading, marking, composure, and bravery. If you cannot get John Terry from Aston Villa then think of Spahic as a decent alternative. 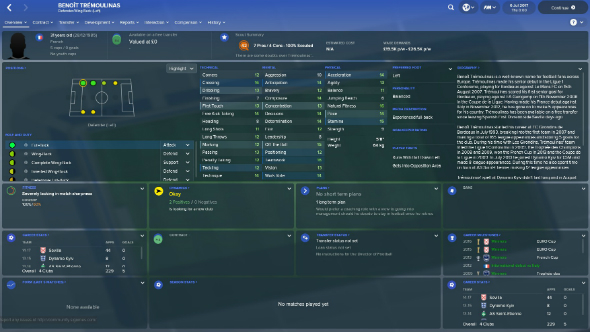 The early promise of Benoit Tremoulinas’s career was never fully realised. But with a handful of caps for the French national team, a Ligue 1 title and French Cup with Bordeaux, and two Europa League winner’s medals with Sevilla, he has had a better time of it than most.

He offers a very similar set of skills to those of Bacary Sagna, albeit on the opposite side of the pitch – although he is slightly quicker than his countryman. Tremoulinas could start for a Championship club but at Premier League level he is likely to struggle. 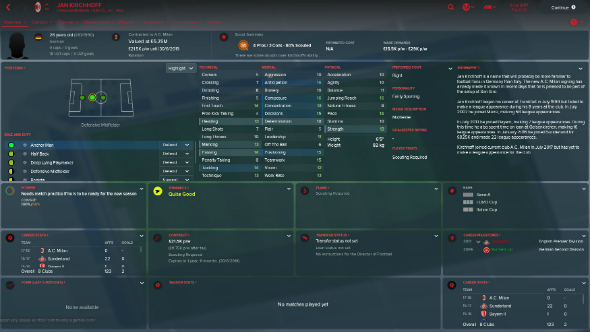 Not too long ago it seemed as though Jan Kirchhoff was destined for a stellar career, joining Bayern Munich from Mainz as a 22-year-old to learn under Pep Guardiola. However, after one season and just seven appearances for the Bavarian club, Kirchhoff was loaned out to Schalke 04 and eventually sold to Sunderland for a nominal fee.

He overcame a disastrous debut for the Black Cats in an away game against Tottenham to become a somewhat valuable squad player, but at 26 it looks as though his days at the elite level are over. If you are managing a team newly promoted to one of Europe’s best divisions then certainly consider this Football Manager 2018 free agent as a rotation option, but his talents are more in-line with the upper end of the second tier. 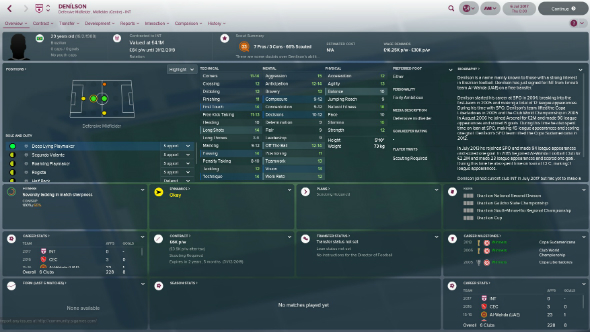 It is worth signing Denilson simply to give him one final chance to make good on the talent that he has or, at least, once had. Upon signing for Arsenal in 2006, it was expected that – merely due to him being Brazilian, it seemed – Denilson was going to score 50 goals a season and embarrass defenders with nutmegs and ankle breakers at every opportunity. Given that he is on a Football Manager 2018 free agents list, you would be wise to adjust your expectations accordingly.

As it turns out, Denilson did neither of those feats – he was never going to. In reality, Denilson’s game is about being a calming, dependable presence in the centre of the field – forever focused on keeping the play ticking over and providing a bridge between attack and defence.

Use him in that way and, at 29, he still has something to offer. 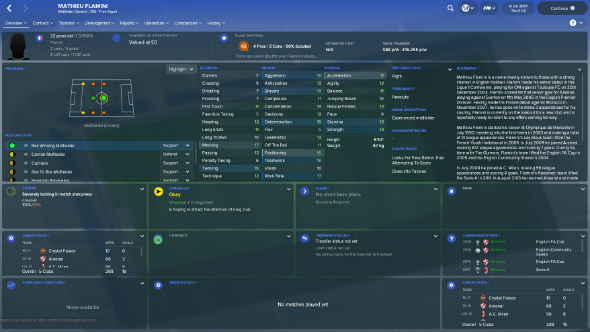 If Denilson is the calming presence then Mathieu Flamini is the fire. Not getting enough red cards? Want to keep the referee busy? Think football should be closer to the UFC? Get Flamini in your team.

The Frenchman still has enough quality in terms of positional sense, teamwork, work rate, marking, and bravery to make him a good option if you are trying to hang on to a lead in the final moments of a game. Just try and keep him somewhat calm before sending him on, otherwise his aggression rating of 18 is going to see him sent straight off again. 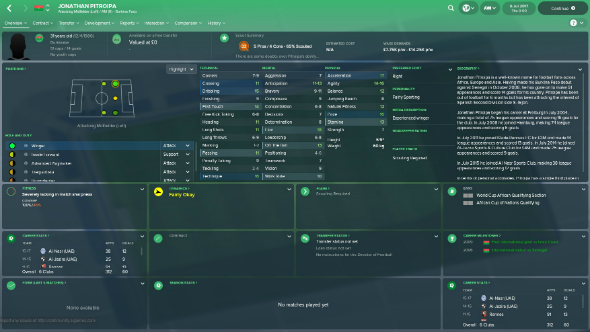 Of all the Football Manager 2018 free transfers out there, Jonathan Pitroipa is arguably your best bet for pace. If you are lacking it to the same extent that you are lacking money, then you could do a lot worse Pitrioipa – who cut his teeth in Germany before going on to play for Rennes in France’s Ligue 1 for four years.

Unfortunately, his other abilities are less impressive and you can expect him to ‘do a Walcott’ and fail to get his crosses and shots away just as much as he succeeds. Still, he is worth a place in a team of average English Championship quality. 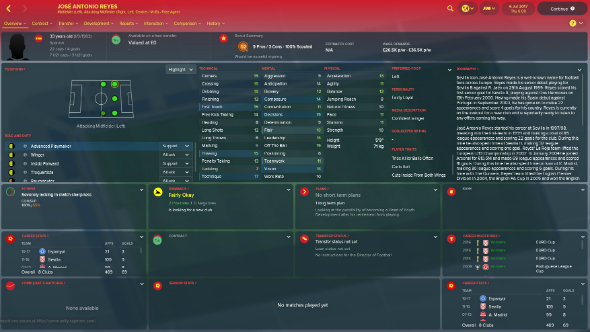 The fourth former Arsenal player on this list, Jose Antonio Reyes, has until this season been plying his trade in Spain’s La Liga – most notably as part of the Sevilla side that won three Europa League titles in succession.

Admittedly, he is slow and getting slower, but he makes up for it with leadership, vision, passing ability, and brilliant dribbling. Importantly, he has a high decision-making ranking that allows him to overcome what he lacks in speed.

As long as you are not asking him to outrun opposition fullbacks, he makes a good option as an attacking wide player whose job it is to thread passes towards very mobile forwards. 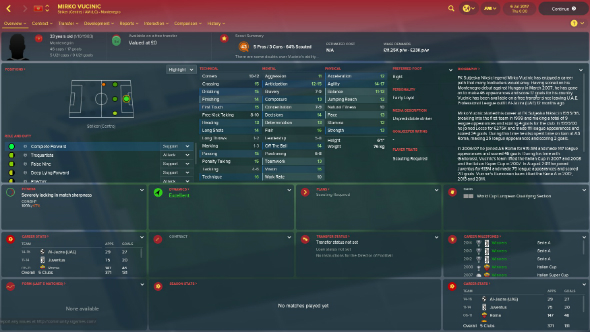 With three Italian Serie A winners medal and two Italian Cup medals to his name, Mirko Vucinic is the most decorated player on our Football Manager 2018 free agents list. For both AS Roma and Juventus, he proved to be just as effective as creator and scorer, and for a number of years he was on the radar of England’s top teams.

His height and calm mentality make him dangerous today, and at 33 he can be an asset for another season or two. Further, he will not complain if you sit him on the bench, and so he makes a great backup option for the best price: free. 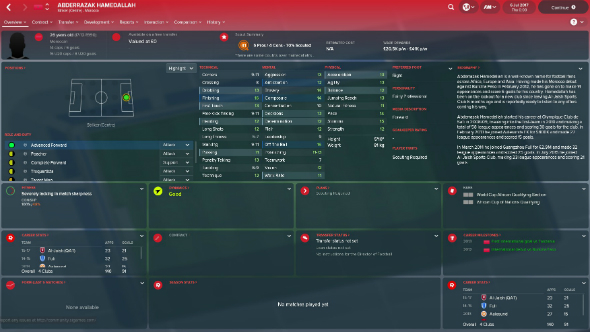 He is far from a household name in Europe, but Abderrazak Hamdallah’s goalscoring record is quite incredible. In 14 senior appearances for Morocco he has netted six goals, and at club level he has scored an impressive 91 in 140 appearances.

Sure, these have come across clubs based in North Africa, the Middle East, and China – but an eye for goal is an eye for goal. Hamdallah does not excel in any particular skillset, but he is not found wanting in any area, either. As such, he is a good all-rounder who can be depended upon to do the job you ask of him without a fuss.