Looking for the best sports games on PC? For the longest time, publishers were reluctant to bring their best-selling sports games to PC. Other than EA’s annual FIFA release and Sports Interactive’s Football Manager series, the sports genre on PC has been pretty sparse up until recently. Nowadays, no matter what sport you’re into, you should find something to scratch that competitive itch.

Compared to their console counterparts, the sports games featured on this list usually have smaller player bases, but that doesn’t make them inferior. The PC versions of some of these games have a lot to offer, including support for high refresh rates and a variety of high resolution panels. Ever wanted a view of the entire pitch in a football game? That’s entirely possible on PC.

These days you can find most sports games on PC with almost no compromises. Sure, you can’t get some games like UFC 4 and MLB The Show 21, but who needs those when you’ve got Street Fighter V and Super Mega Baseball 3? Here are some of our top picks for the best sports games on PC.

The best sports games are: 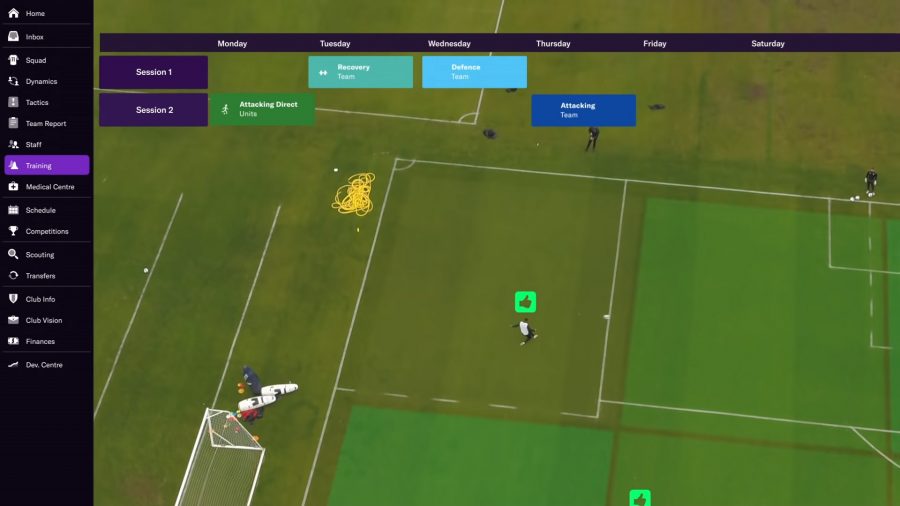 The Football Manager series is known for being one of the most in-depth and strategic sports games of all time. Football Manager 21 puts you in the shoes of the next Pep Guardiola as you manage your squad of irritable players while trying to deal with a tight transfer budget.

Related: Check out the Football Manager board game

Football Manager contains databases filled with thousands of players, complete with detailed information about each individual’s playing style and their potential. Whether you decide to take a non-league team up through the ranks to glory, or you’d rather dominate with a Super League team, Football Manager 21 gives you the tools to become the greatest manager of all time. 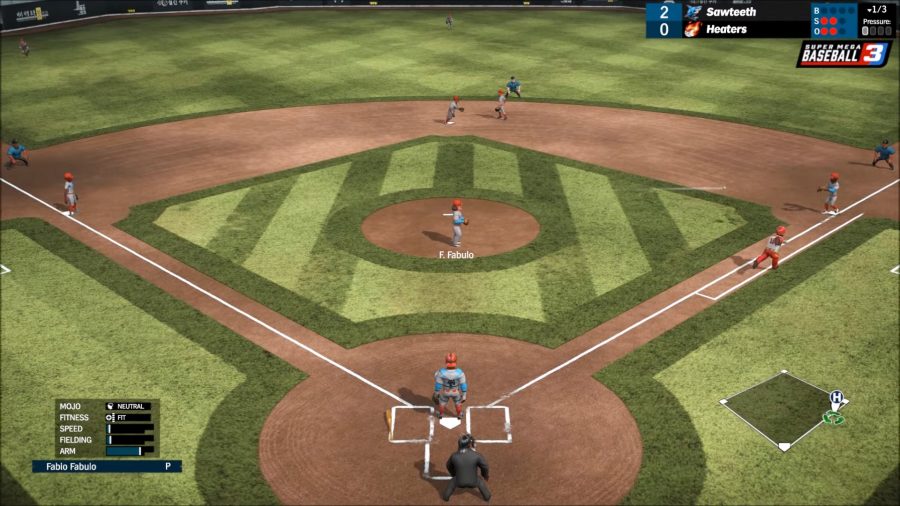 When it comes to baseball games on PC, it’s fair to say we don’t have many options. Thankfully, Metalhead Software’s excellent baseball series provides an alternative to the licensed games available on console. The devs have focused on creating an accessible experience that is easy to pick up and play. Don’t let the cartoon aesthetic fool you -Super Mega Baseball 3 contains a lot of depth both on and off the field.

You can focus entirely on the multiplayer aspect of the game, but there’s plenty of single player content worth exploring. A new addition to the series is the Franchise mode, which spans across several years this time around instead of being focused on a sole season. Build a strong team and watch them dominate the sport as you take from through humble beginnings to the grand heights baseball has to offer. 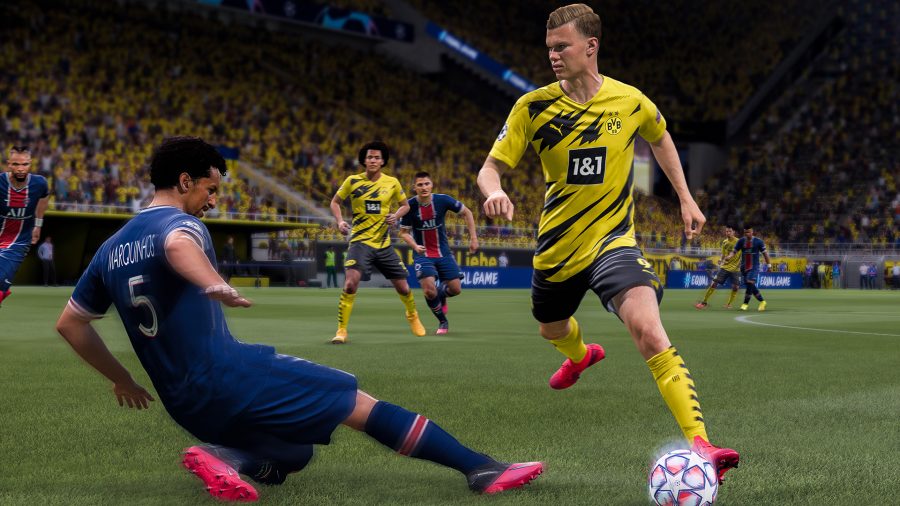 The FIFA series has always been a staple of PC gaming ever since the 90s. Though there have been some awkward years between engine upgrades, EA has always stuck by their PC audience. FIFA 21 was far from the most innovative in terms of gameplay, but you know what they say, if it ain’t broke…

Next Seasono: Get the latest information on FIFA 22

FIFA has dominated the football scene ever since Ultimate Team was introduced to the masses with FIFA 11. The card game has completely changed sports games forever as players clamour around the latest additions to the game mode each week. Assembling your favourite players from the past and present is simply too tempting a prospect to ignore. 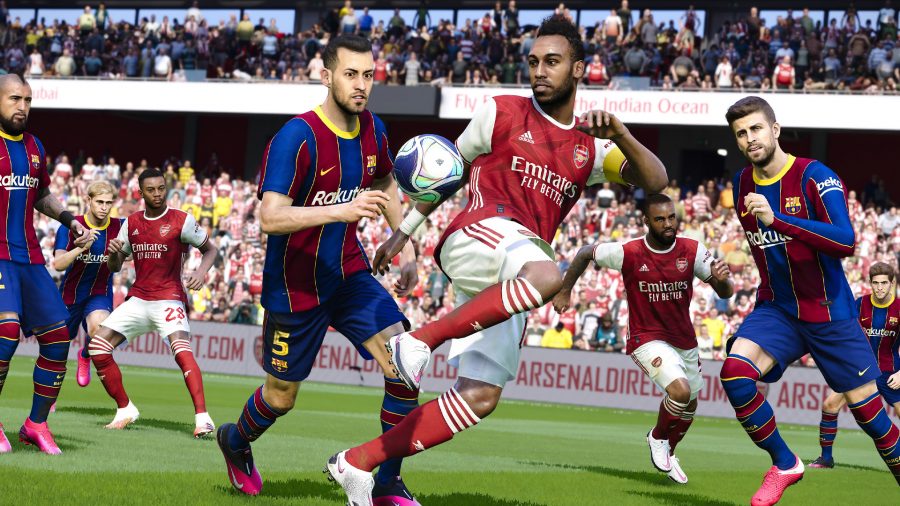 You can’t mention FIFA without bringing up the Pro Evo series, or eFootball PES as it is known today. Pro Evolution Soccer has been around on PC for almost two decades now, and while it may not be as popular as the FIFA series, it certainly has its share of hardcore fans. eFootball PES 2021 is known for its realistic take on football, giving players considerably more control over each individual player compared to FIFA.

This year’s version of PES was a low-cost season update which focused only on changing the squads and kits instead of a substantial update to the game’s mechanics. Konami wanted to spend the year focusing on the transition to Unreal Engine 5 for next year’s game. 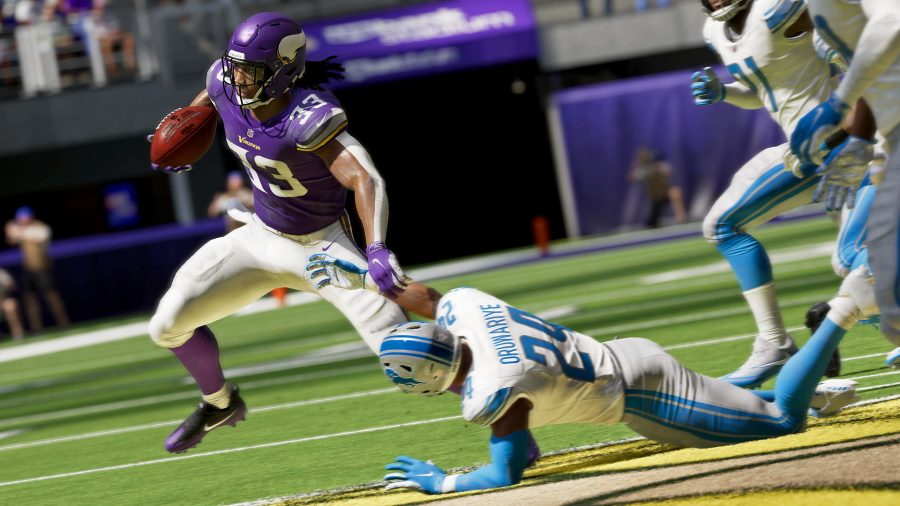 Madden NFL 21 on PC fixes a lot of the issues that occured on console – problems regarding frame rate issues and long loading times can be solved by using a mid-range PC. There have been some criticisms of the Madden series over the past few years regarding complacency due to the lack of competition. Madden 21 is far from the best game in the series; like with any sports team, fans have to take the rough with the smooth. 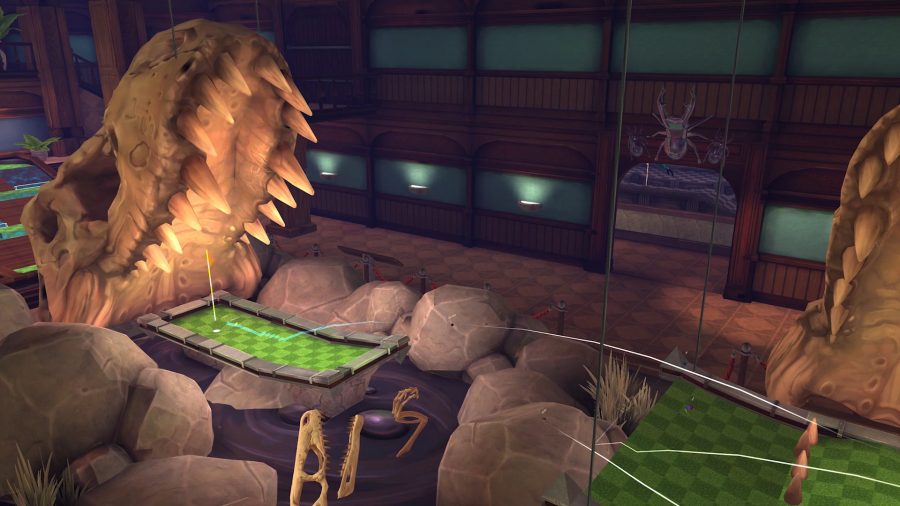 Golf With Your Friends

Golf With Your Friends is exactly what it sounds like – play with up to 11 friends as you make your way through themed mini golf courses. Turn on power ups to freeze your opponent’s ball, and lay down lanes of honey to stop players in their tracks. The game even comes with a built-in level editor for players who have a keen eye for golf courses.

Golf With Your Friends can be played simultaneously online or locally via the hot seat option; perfect with Steam’s Remote Play feature. The best part about this game is that the barrier to entry doesn’t exist – no real life golf skills apply here; simply pick a direction, decide how hard to hit the ball, and pray for the best. 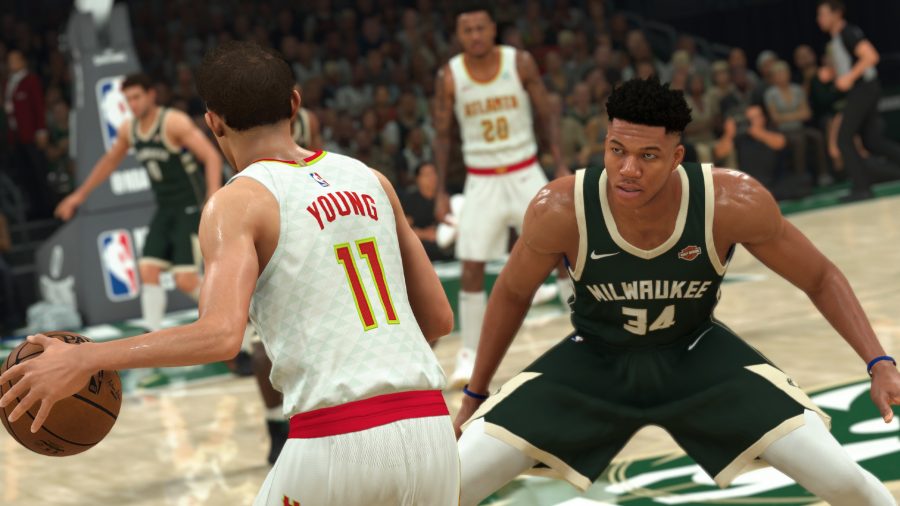 If you’re primarily playing offline, NBA 2K21 is an excellent game with a lengthy MyCareer story mode for solo players to delve into. Not only do you have the entire selection of modern teams available to play, 2K21 offers players a number of classic teams throughout NBA history to pick from. Want to see how the 2021 Golden State Warriors stack up against the Chicago Bulls from ‘96? You can play match ups like this without having to spend any extra money.

NBA 2K21 is the definitive basketball game on PC, and it’s also the only basketball series available right now. Almost every version of NBA 2K is filled with cheaters that the developers are struggling to squash; unfortunately, this makes online matches more frustrating than enjoyable. 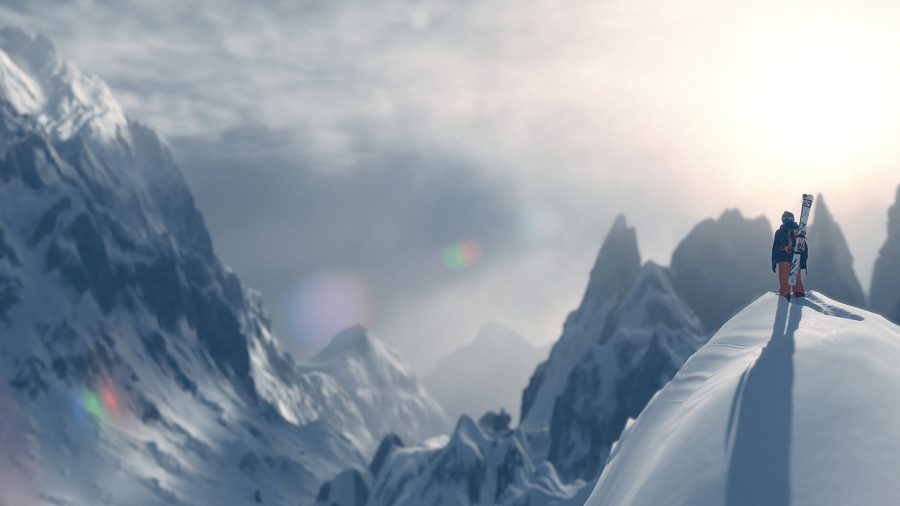 Steep is an open world game that takes place in the Alps, and grants you free rein over the slopes, as you traverse the snowy environment in almost any way you see fit. At launch, Steep featured four main activities: paragliding, wingsuit flying, snowboarding, and skiing. Since then, the game has received numerous expansions which introduced new extreme sports and mountains from other parts of the world. There’s even a Winter X Games and 2018 Winter Olympics expansion pack to work through if you want.

If you’re looking for the winter equivalent of the Skate series, Steep’s snowboarding and skiing options provide a similar chill vibe as you descend down a mountain trying to land impressive tricks. You don’t have to compete against other players to have a good time, but overtaking your friends as you slice through the snow at extreme speeds is a deeply satisfying feeling. 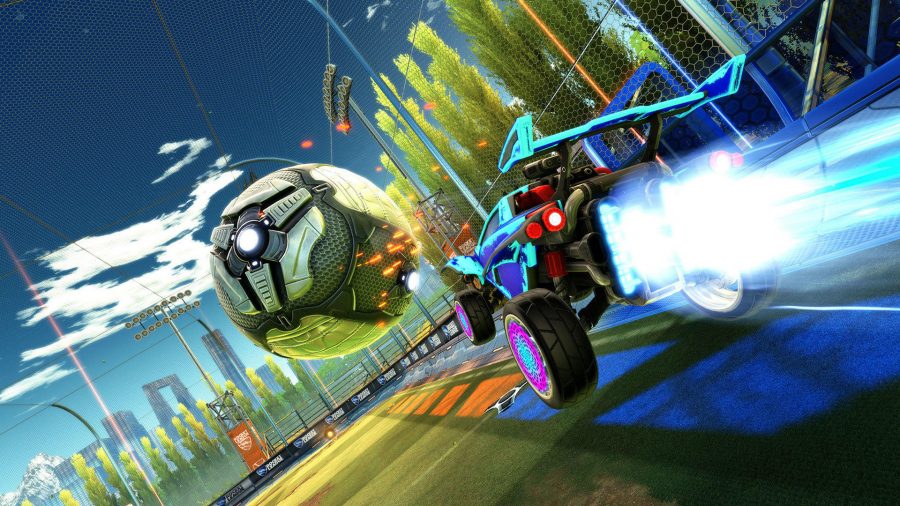 Rocket League is one of the best football games of all time. Yes, it replaces a team of 11 players with three rocket-powered cars, potentially adorned with a stack of pancakes or a sombrero, and it’s still an excellent football game. The FIFA and PES communities constantly bicker amongst themselves about scripted gameplay and pay to win mechanics; you won’t hear any of that about Rocket League.

Psyonix has perfected the mechanics of Rocket League, allowing the game to be accessible to most people while maintaining an absurdly high skill ceiling. The esports scene for Rocket League shows just how much depth there is to a game about flying cars. Even better, Rocket League is free to play and features cross-platform play on every platform. If you have the slightest interest in hitting a massive ball with a flying car, give Rocket League a try. 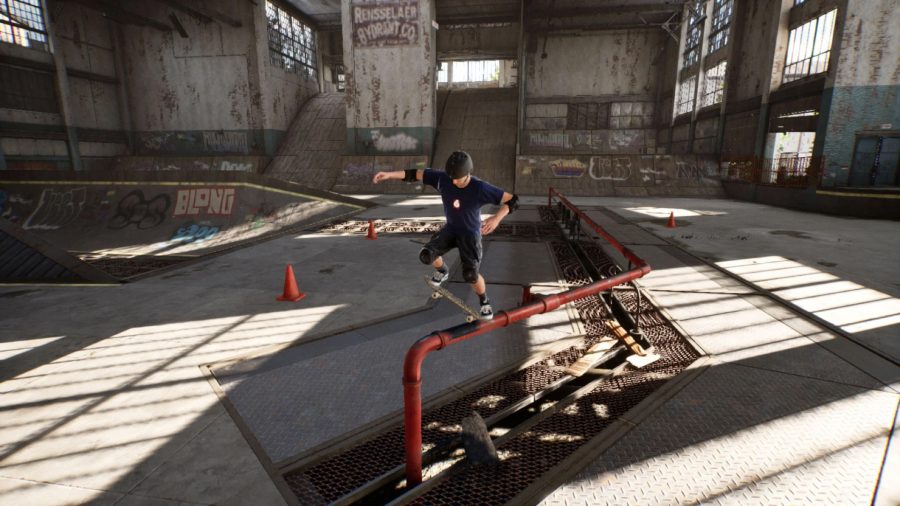 Vicarious Visions’ Tony Hawk’s Pro Skater 1 + 2 remake takes everything you remember about these classic games and makes them modern. The Tony Hawk series evolved quickly when it first appeared in 1999, launching a sequel with larger levels and improved mechanics for eight consecutive years.

The original Tony Hawk games still hold up today, but the important mechanics introduced in the later games can make them difficult to go back to. This remake brings together the best aspects of the series and ties them in with the first two games to create a masterpiece. Whether you’re looking to shred with your mates locally, or you want to see how you fare online, Tony Hawk’s Pro Skater 1 + 2 features robust multiplayer options to suit every type of player.

Who said there weren’t any sports games on PC? Basketball, football, rocket-powered vehicular football… whatever you want, it’s on PC. We know there are some sports that just aren’t available – apologies to any NHL fans out there, maybe one day we’ll get an ice hockey game from EA. Want to know what’s coming out later this year? Check out our list of the best upcoming PC games to find out what games are heading your way.