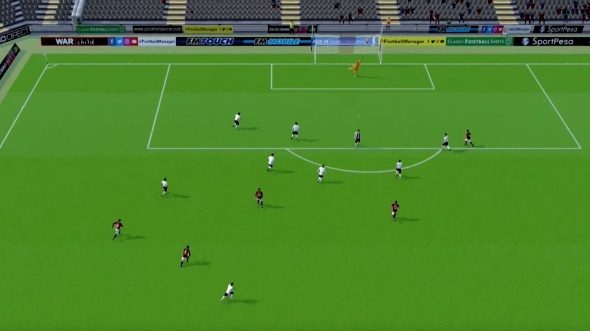 If you are looking to dominate your peers over the long term in Football Manager 2018 then it pays to invest in the best wonderkids: young, up-and-coming players. Without such a vision of the future you are at the whim of the vagaries and unpredictable price fluctuations of the seasonal windows.

Unfortunately, predicting which young players are going to make the grade is a difficult task. For every Lionel Messi there are 50 to 100 Gavin Hoytes and Bebes. Therefore, it is essential to do your research before taking a gamble on a teenager.

To help you in this regard, we have put together a team of 11 players we believe are going to make the grade and come to dominate Football Manager 2018 as the virtual years pass by. Some of those listed are well known and already plying their trade at top European clubs, others are rough diamonds waiting for their moment to shine.

Sign as many of these Football Manager 2018 wonderkids as you can, make sure to give them the right coaching, and reap the rewards. 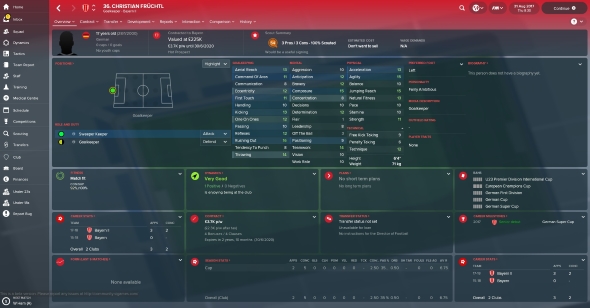 Gianluigi Donnarumma is so last season. In 2018 you need Bayern Munich’s Christian Fruchtl, sweeper keeper understudy to legend-in-his-lifetime Manuel Neuer, and one of FM18’s best wonderkids.

At just 17, Fruchtl possesses impressive stats across those that matter for a modern keeper, including composure, rushing out, agility, and jumping. He only gets better under the tutorage of quality coaches.

You will need to keep Fruchtl waiting in the wings for a couple of seasons before putting him into the fire that is a starting 11 for a top-tier club. It also helps his development enormously if you can find a team to take him on loan and play him regularly. 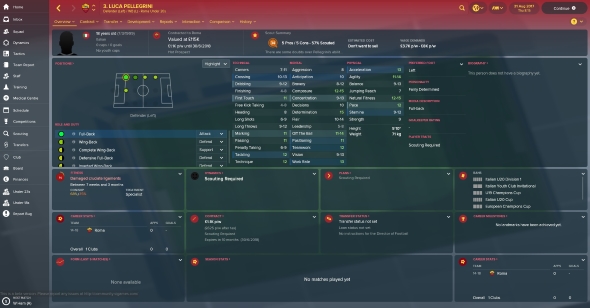 Young fullbacks harbouring genuine quality are notoriously difficult to find given the increasingly complex nature of the position in the modern game. They need to be attackers and defenders and come with the physical prowess – predominantly speed and stamina – to move up and down the touchline for 90 minutes.

Pellegrini has this ability and combines it with excellent starting stats for work rate, teamwork, and off the ball – meaning he will rarely be out of position. You can also pick him up for a fairly reasonable fee, meaning you should place him high on your wonderkids priority list. 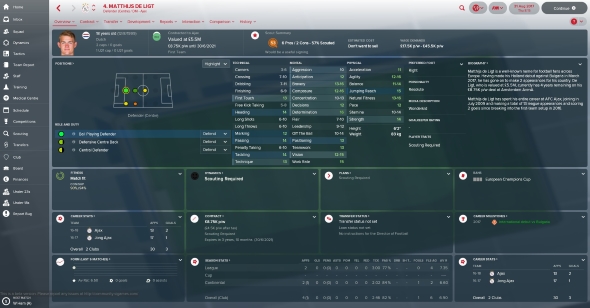 At 17 years of age, Matthijs de Ligt became the youngest player since 1931 to play a senior game for the Dutch national team. This followed his call up to the Ajax first team for the 2016/17 season in which he played 23 times – nine times in the Europa League. Such a level of experience is almost unheard of for a central defender at such an age.

De Ligt is a fantastic option if you are looking for someone to play the ball out of defence as opposed to merely being a stopper. He is more Toby Alderweireld than John Terry, which is very much in keeping with the needs of the top modern teams. 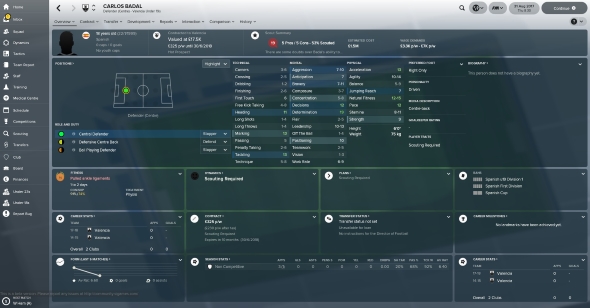 If safety at the back is your concern then you could do much worse than pin your future hopes on Valencia’s Carlos Badal. He is more of a no-nonsense defender than de Ligt, which means the two would work quite well as a partnership.

His determination rating of 19 out of 20 is simply unheard of for a teenager, and this is backed up by excellent ability in tackling, marking, and heading making him a superb wonderkid. Swoop for him at the start of the game and take advantage of his meagre transfer release clause. 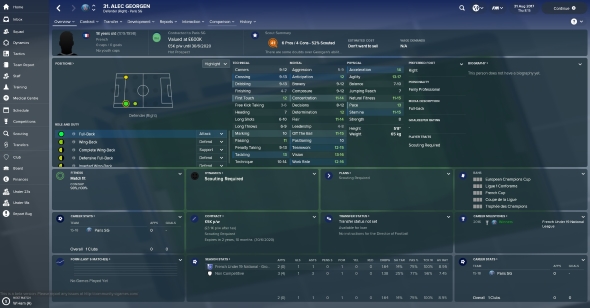 Not many young players enjoy the kind of mental stats owned by PSG’s Alec Georgen, the 18-year-old standing out in vision, work rate, concentration, and teamwork. Like Lucatelli above him on this list, these intangible qualities make him an excellent wonderkid candidate to play fullback for many seasons to come.

PSG clearly understand that they have someone of class on their hands, as demonstrated by the fact that it is incredibly difficult to convince them to let him go for much less than £15 million – despite a valuation of just £600k. 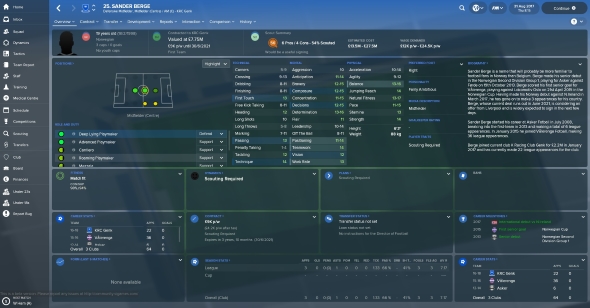 Hailing from Norway, Sander Berge is one of the finest young players we have ever seen in Football Manager. His technical passing ability and intelligence make him a threat when deployed anywhere through the middle of the pitch, meaning he is a player you can build your team around.

He costs quite a bit of cash to acquire, but it is well worth the effort and investment. At the start of the game he is not quite ready for a top team, but send him on loan for a season and start playing him regularly thereafter. 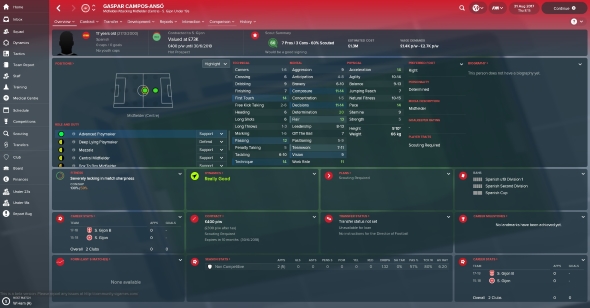 Like Berge, Gaspar Campos-Anso is a future star through the middle of the pitch – although the Spaniard is better placed slightly further forward than his Norwegian counterpart.

His stats for technique, passing, and first touch give him a David Silva-esque ability to keep the play fast and tidy in and around the box, but he outdoes his fellow countryman in terms of pace and acceleration. His low fee makes him an absolute bargain. 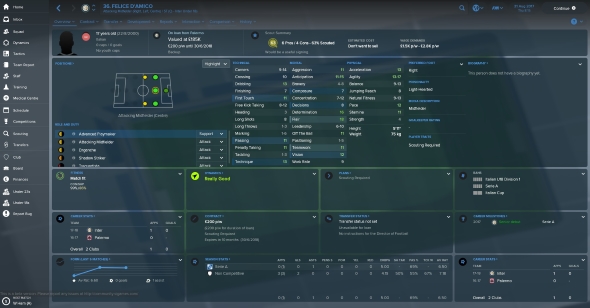 We all like a player with flair, someone not afraid to launch into an audacious dribble against the best teams, or attempt a ridiculous showcase of skill when simplicity would suffice. If you are looking for that than look no further than Felice D’Amico.

He is not an expensive player, but he starts the game out on loan and with a future fee release clause. This means you have got to wait a while before you can sign him, but it pays to add him to your shortlist and not forget that he is there. 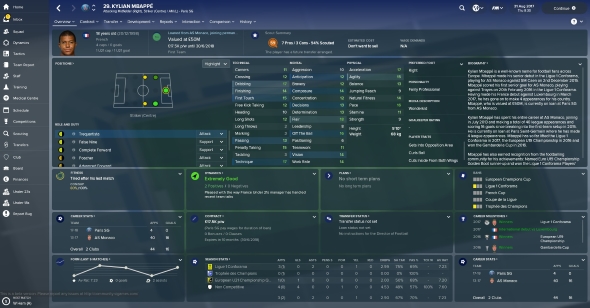 If you did not know about Kylian Mbappe before his £160 million move from AS Monaco to Paris-Saint Germain, chances are you do now. Arguably the world’s most high-profile wonderkid, it is impossible to keep the Frenchman off of this list despite the difficulty you are going to have coming up with the funds to prise him away from his Parisian paymasters.

Mbappe’s pace, acceleration, and dribbling ability make him an incredible weapon when asked to run directly at defenders, with his natural flair giving him the self-confidence to never give up.

Acquire this 18-year-old wonderkid, or simply play as PSG in order to take advantage of his talents, and you will have an attacker primed to dominate at the top level for many seasons to come. 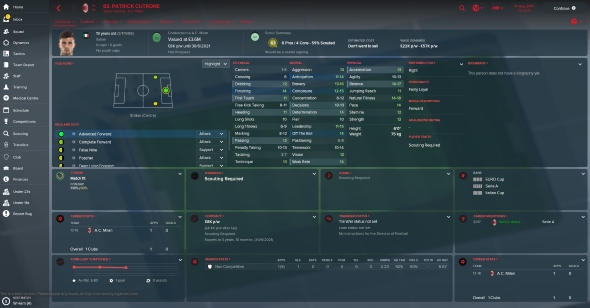 Nostalgic for the battering ram style of Italian strikers such as Christian Vieri and Luca Toni? Then Patrick Cutrone is your man. The six-footer is more than capable as an individual to build a blunt-but-effective attack around, possessing the determination and speed to chase down hopeful long balls, the strength to hold off defenders, and the passing ability to bring onrushing teammates into play.

His finishing ability with his head and feet isn’t too shabby, either. 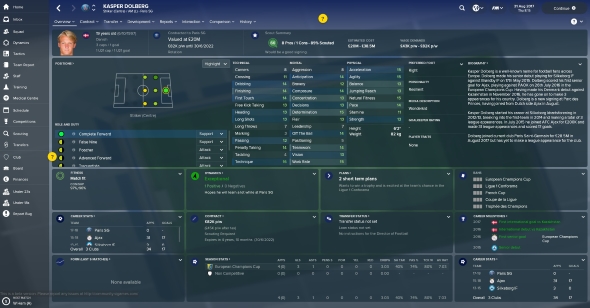 Within weeks of starting our first two Football Manager 2018 careers, Kasper Dolberg was snapped up by PSG in one instance, and by Manchester City in the second. Do you need any more evidence of his potential quality?

Dolberg’s physical stats are uniformly impressive across the board, backed up by equally strong technical abilities. As such, the Dane makes for a fantastic player when used in the ‘Complete Forward’ role and used to created goals as frequently as scoring for himself. Think Karim Benzema but slightly better.