Wondering how to complete the Ariana Grande punchcard quests? The Fortnitemares Fortnite Halloween event is here, and there are plenty of spooky additions to the battle royale game. When you fly over the map on the Halloween battle bus, you may notice a new blocky purple POI called Convergence, with the Cube Queen hovering overhead, surrounded by a yellow shield.

That’s not all that’s new – Ariana Grande is back on the Fortnite map. This time, instead of performing a concert for us, she’s got some punchcard quests for us to tackle. There are five stages to the Ariana Grande monster hunter punchcard, and completing them all grants you 150,000 battle pass experience and the all-weather extractor pickaxe skin in the ‘dark style’. Fortnite Crew subscribers also receive the ‘brite style’.

There are plenty more freebies available to unlock in the Fortnitemares Halloween event; completing Dark Jonesy’s punchcard quest gives you a free glider, and the Ghostbuster punchcard quests also grants you rewards. There’s also a limited time Horde Rush mode with its own quests and rewards. Here’s how to complete all the Ariana Grande punchcard quests in Fortnite.

Before you can start the Ariana Grande Monster Hunter punchcard quests, you need to find her. The intergalactic singer can be found on the pier in Believer Beach. 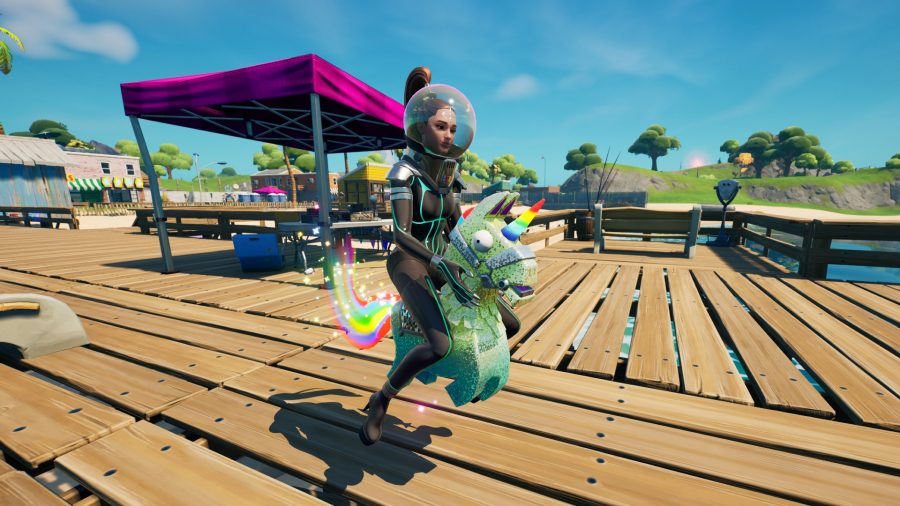 Here are all the Ariana Grande punchcard quests and how to complete them:

Collect a Record and place in a Turntable

The caretaker footprints can be found in multiple locations all over the map. The footprints are large, circular welts in the ground glowing with purple energy. You have to study two sets of footprints in order to progress.

These symbols are large pink crystals that can be found in Sideways portals after defeating cube monsters. You need five in total.

The command signals can be found in Believer Beach, Weeping Woods, Misty Meadows, Retail Row, or Corny Crops. You will see a pink silhouette hovering in the middle of a series of blue holograms. To reveal the command symbol, you must replicate the pose portrayed in these holograms by emoting in front of them. The default key to summon your emote wheel is B.

After imitating all the poses, the command symbol will materialise.

To complete the final challenge, you must launch three signal flares. Signal flares are striped rockets that can be found in five locations across the map: Craggy Cliffs, southwest of Dirty Docks, south of Believer Beach, on the mountain southwest of Catty Corner, or on the hillside between The Convergence and Lazy Lake.

Once this is done, you’ll unlock the All-Weather Extractor. If you’re looking for more quests to complete, check our Punchcard quests guide to help you decide which ones to tackle next.