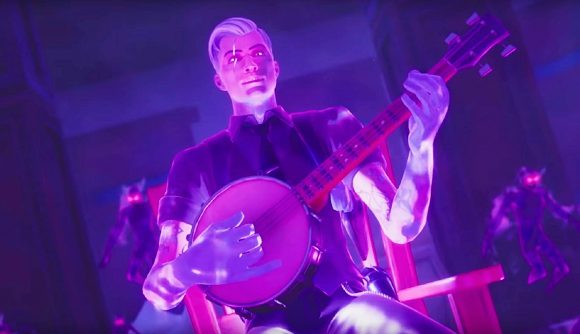 Over the past year or so, the Fortnite Midas skin has emerged as one of the battle royale game’s most popular. If you’ve been out of the loop, Midas is an Agency leader who can turn anything into gold – because Midas’ touch, geddit? He was introduced back in Fortnite Chapter 2 Season 2 and boasts a cool, suave look. Now, though, it looks like he’s getting an appropriately chalky, gold-plated sister.

Dataminer Hypex dug up the skin alongside a bundle of emotes and the works. Straight away, the similarities are there to see. Marigold has the same sophisticated, chalky look with splotches of gold thrown in for good measure. She even has a skin variant where she’s entirely gold, which sound familiar if you’ve Midas with the same effect.

So how do you get her? Going by the leaks, it looks like she’ll be featured in an upcoming bundle alongside some other goodies. We’ve got two gold-plated short swords which will probably replace your pickaxe and a semi-gold duffel bag that’ll likely be your back bling item.

As for when that bundle will go live or how much it’ll cost, we don’t know as it hasn’t been dug up yet. It looks like it won’t be long, though.

You can catch a glimpse at the skin below:

In recent times, we’ve seen heaps of new characters come to Fornite. We’ve seen figures Xenomorph and Ripley from Alien join the battle bus alongside Terminator, Predator, and some chaps from Street Fighter.

The Fortnite Chapter 2 Season 6 release date is still a wee bit away, so it remains to be seen if Marigold pops up there or not. In the meantime, though, we’ve rustled up all the information on it to give you a one-stop place to see what’s happening.