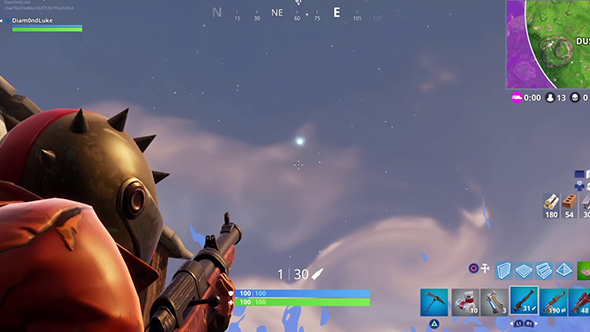 Update, April 18: The sky is falling! Fortnite’s meteor shower is growing ever larger.

Today is the day, friends – the day Tilted Towers goes down for good. Er, at least in theory. A comet’s been looming in the skies over the Fortnite for weeks now, and some decoded messages pointed to an event taking place on April 18. Today is that day, and while nothing apocalyptic has happened just yet the meteor shower has gotten far more intense.

Reddit and the Fortnite-minded side of Twitter are awash in screenshots and clips of multiple celestial objects burning through the sky at a time. What does it all mean? We don’t know for sure, but the interpretation of early clues continues to point toward the destruction of Tilted Towers.

Players are so convinced this spells the end for Tilted Towers that they’re even holding wakes for the (presumably) soon to be destroyed location. They’re queuing up in solo games, dropping straight to the location, then simply hanging out, destroying the city, and waiting for the storm to take them. It’s beautiful. It’s sad. And it’s driving everyone crazy with speculation on what’s going to happen tonight.

Original story, April 2: A celestial object has appeared over the skies of Fortnite Battle Royale, and it spells something for the future of the game. Exactly what that something is happens to be a topic of great speculation and debate, but with a comet bearing down on the familiar map there are certainly some intriguing possibilities.

One of the most popular is that Tilted Towers is due for destruction. The area’s central location and loads of gear means that it’s become an unbalanced favourite drop point. As Polygon have noted, datamined files confirm the object is a comet, and a number of telescopes have appeared pointed toward the burning object, along with some new loot chests.

Players using controllers have also felt some strange rumblings when the comet appears, and some Morse code conversion has translated those rumbles to the message “SOS D 5 418.” D-5 is the location of Tilted Towers on the map, and 418 could translate to April 2018 or April 18th.

If you’re not on board with the Tilted Towers destruction theory, there’s plenty more speculation on the game’s subreddit, ranging everywhere from dinosaur-themed extinction events to some crazy deep tributes to Epic history. (But bear in mind most of this happened around April Fool’s Day.)

Regardless of the specifics, Fortnite’s third season should be coming to a close soon – based on the length of previous seasons – which means the time is perfect for something big and new. In the meantime, keep riding your rockets until the sky’s harbinger of apocalypse takes us all.