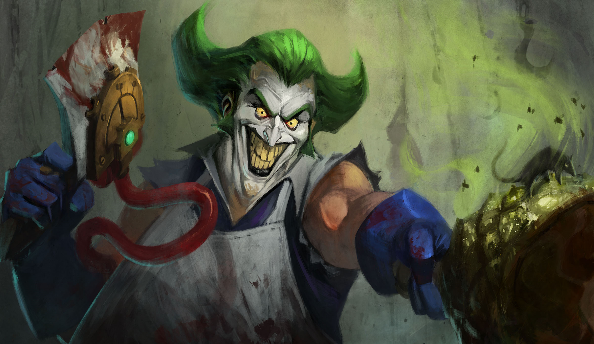 April Fool’s Day has somehow become gaming’s big holiday, as the industry comes together this time every year to celebrate the fun that can be had in poking fun at itself, its fans, and of course the humble games press. The jokes and pranks range from the eye-roll-inducing to the genuinely delightful, and rather than individually post each one we stumble across, we’re using this story to keep them collected. Here are the best of this year’s April 1.

Here are some of the best April Fools goofs from an alternate universe’s games industry.

We love good boys (and girls) around these parts, and Far Cry 5’s adorable companion Boomer is no exception. But do we do when our time with virtual dogs impedes the time we spend with our real furry friends? Luckily, Ubisoft have the answer in the form of the Squeaky AR-C, which will let you roleplay your adventures with Boomer alongside the real dog of your choice – or at least keep them occupied while you hunt down some new weapons.

As a Designer of Game Environments working in CD PROJEKT RED you’ll be responsible for digging up bugs, fetching missing code and sniffing up plot holes. Sounds good? Apply now!

Speaking of good boys, CD Projekt Red want an experienced “Designer of Game Environments” to help work on upcoming projects. (If you don’t speak acronym, that stands for “doge,” which is like a dog but memeier.) It’s a tough job, including “optimizing tail wagging” and “debugging the lawn,” but somedoggy has got to up to the task.

Remedy have a remedy for your sleepy mornings

Remedy’s mysterious P7 will sadly never see the light of day, as the studio behind Max Payne, Alan Wake, and Quantum Break have decided to quit making videogames in order to focus on their true passion. No, not FMV – coffee! Remedy will transfer their expertise in digital storytelling to making dark roasts for your drinking pleasure. (Though it may be difficult, since Sam Lake has apparently never even tasted the stuff before.)

The best April Fool’s gags are always those that provide us with something tangible and fun – even if only temporarily. Taking us back to the days when definitively not-age-appropriate entertainment kept getting kid’s cartoons, Overkill have launched a trailer for Payday: The Animated series, complete with an appropriately rockin’ 80s theme song. 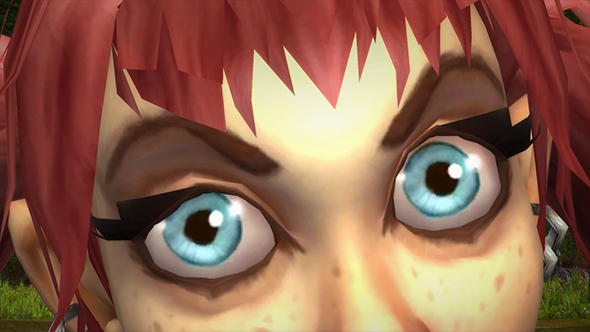 A bonafide holiday like April 1st is the perfect opportunity to announce more holidays for your game, and Blizzard’s World of Warcraft team certainly understand the synergy. They’ve got a new series of micro-holidays on the way, ranging from level one Battlegrounds to repeatable repeating daily quests. There’s even ten-second holiday in there for bonus celebrations.

World of Warcraft dances into arcades 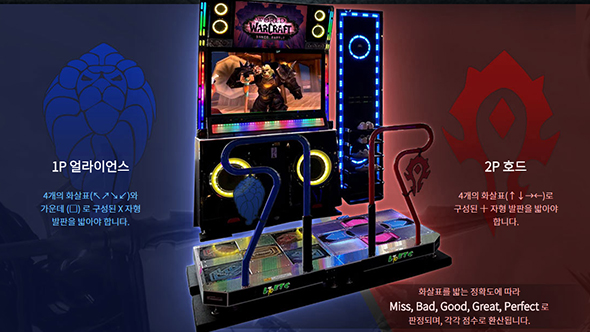 While the English-language Blizzard team did alright for AFD, it’s the Korean division that got the true star with World of Warcraft: Dance Battle. Yep, that’s Alliance versus Horde on the arcade dance floor. Even if you don’t speak Korean, you should definitely check out the images on the official site. 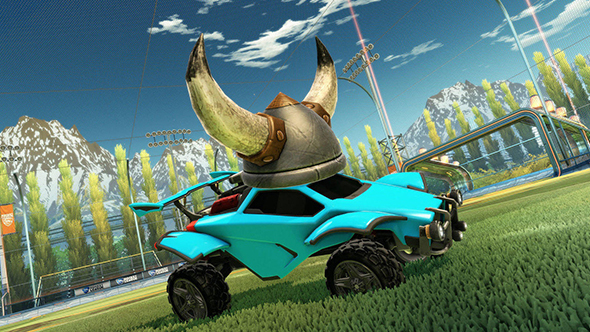 Halo: Battle Royale, because of course 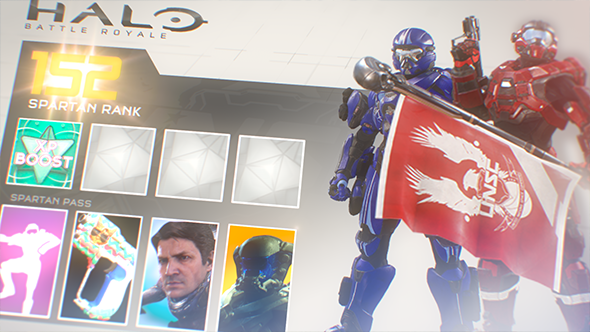 We’re just about due to see the next Halo, and judging by Microsoft’s increasing cross-platform plans it’s almost certainly going to be on PC. So 343 Studios have jumped the E3 gun by “announcing” Halo: Battle Royale on Reddit, complete with a monthly subscription called Spartan Pass for boosted experience gains. What a delight. 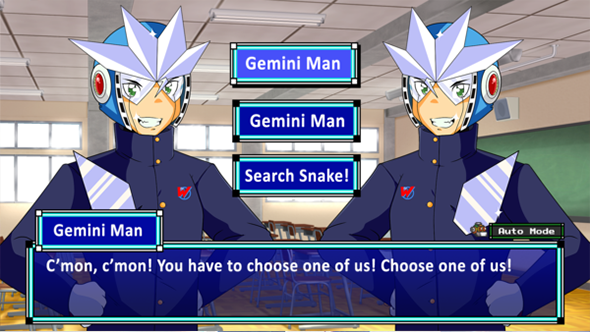 The developers who didn’t announce a new, totally real battle royale game instead decided to detail dating sims based on popular franchises. Mega Man: Date My Robot Master recasts the the series’ robot masters as high school students, giving you the opportunity to date Wood Man, Gemini Man, and Splash Woman. The boss orders should be very interesting here. 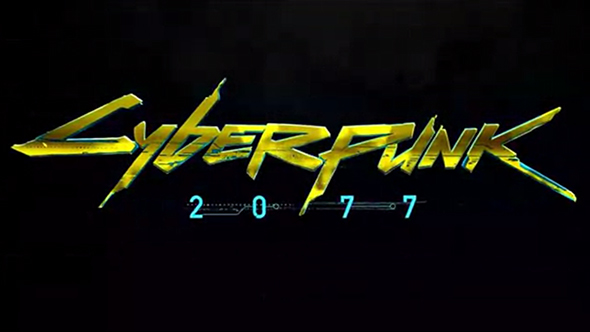 There are few games as heavily anticipated as CD Projekt’s Cyberpunk 2077, and to everyone’s great shock it actually came out yesterday. Er, rather, some game called Cyberpunk 2O77 did. Everyone loves it according to the r/Games review thread, with outlets from USgamenerd to GamesSonar awarding it perfect scores. Aside from noted rebel Gym Sterling, of course.

Loot Mesa adds the one thing Half-Life was missing 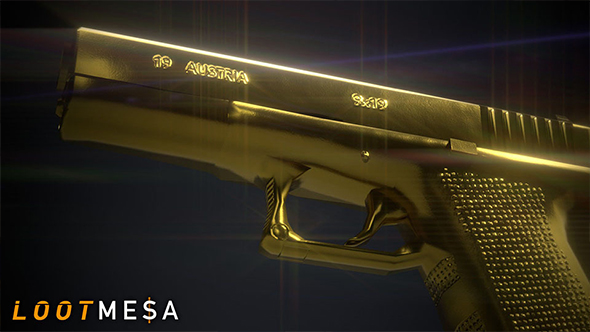 The team behind Black Mesa have done an excellent job of modernizing the original Half-Life, but no game can be truly modern without loot boxes. Luckily for us, Loot Mesais on the way, offering cosmetics including weapon and character skins to really spice up Gordon Freeman’s first adventure. Oh, and they’re doing a Last Freeman Standing battle royale mode, because of course they are.

We mentioned this one yesterday (but didn’t want to spoil the joke), since Gaijin Games began their annual April Fool’s fun at 00:01 Kamchatka time and are running it through 23:59 Hawaii time – the better to get in as much tomfoolery as possible. The gag? They’re “testing” a new nuclear submarine game called Silent Thunder, which you can play through the War Thunder client.

Razer let you “be the machine”

PC gamers are used to upgrading their machines, and Razer’s April Fool’s offering is a nanobot-infused energy drink that lets us upgrade our own cells. Chug a vial of Razer’s Project Venom v2 and you’re ready to go head to head with the pros, with better response times and your own RGB lighting scheme. If anything, Razer’s gag hits a bit too close to reality – it wasn’t all that long ago that energy drinks marketed themselves with almost exactly this kind of straight-faced absurdity. 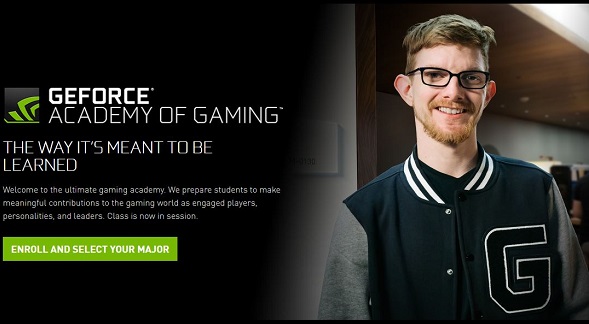 Opting for a more traditionalist approach, Nvidia’s April Fools joke is the Geforce Academy of Gaming. You can choose a major like esports management or “Gameosophy,” and enroll in courses like CRY 102, a class about why you still can’t run Crysis on your rig. Really it’s an elaborate way to sign you up for the email list, but when it’s all over you get a nice acceptance letter (in .pdf format) from Nvidia’s “director of admissions.” 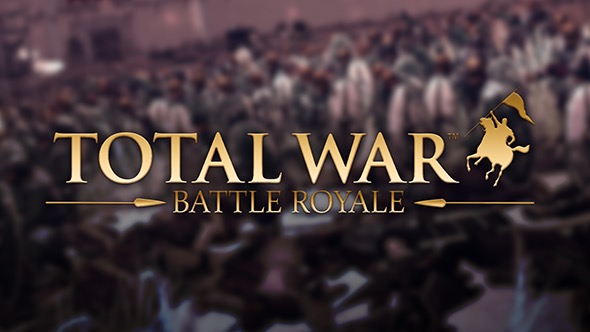 What with Total War’s foray into the Warhammer Fantasy universe in the last few years, it’s hard to put a cap on what’s possible for Creative Assembly’s franchise – anything seems possible, right? But they’re not really going to jump into the current battle royale craze just yet, despite what you may have heard from Richard Scott-Jones earlier. You have to admit, though – moddable hats might make this concept work. 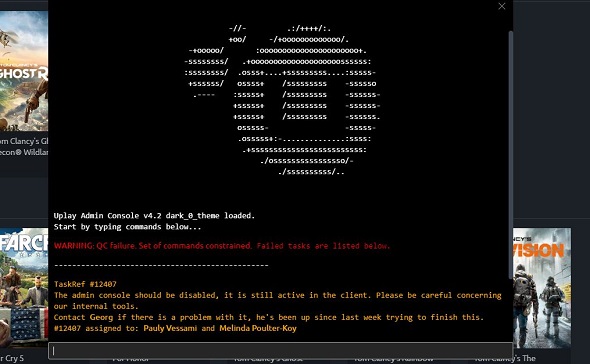 If you open Ubisoft’s Uplay launcher today, you might notice something strange: on the upper right-hand side of the pane, there’s glitching text that says “admin_console.” Click it, and what looks like a terminal window will appear over the Uplay client, complete with dire warnings about “internal tools.” The console accepts various commands that you can play with, such as “increase-level” and “make-it-rain

This one cuts close to home, as anyone who’s looked at upgrading their graphics card this past year has had to deal with the massive price spikes caused by cryptocurrency mining’s demand for GPUs. Corsair is asking for your donation to sponser a GPU that’s been forced to work in the crypto mines, and they’ll gladly send you a photo of a card that’s been rescued and rehomed in an actual gaming rig. They’re accepting all major credit cards, PayPal, and… Bitcoin.

No surprise that this year’s crop of April Fools gags often reference gaming’s biggest trend, Battle Royale. Path of Exile developers Grinding Gears Games have gone a step further and actually implemented a battle royale mode, which you can download and play right now. Winners get a Rhoa Dinner to display in their hideouts.

Twitch plays For Honor… as cows 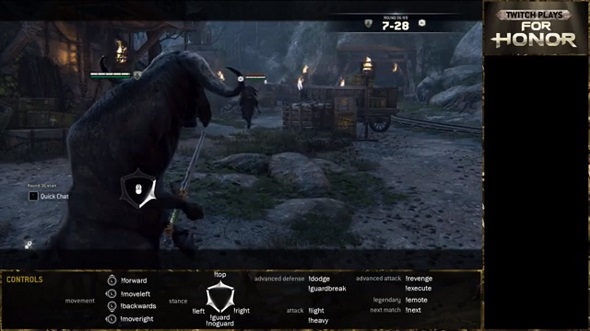 Ubisoft’s brawler abandoned its Vikings vs. Samurai vs. Knights model for something wackier this April Fools – For Honor got its Twitch chat to play as one of two sword-fighting cows. Why cows? Did cows even appear elsewhere in the game? Is it a reference to Diablo’s cow level? As with the rest of For Honor, it’s best not to ask too many questions, and just keep that guard up.

No Man’s Sky subreddit gets a makeover 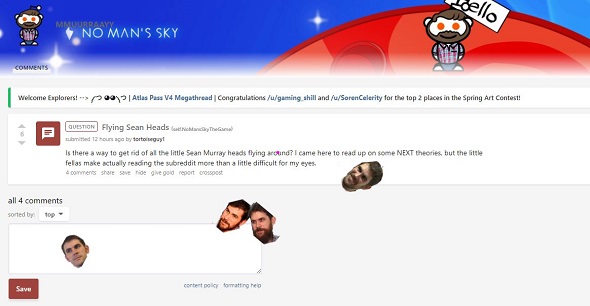 The biggest No Man’s Sky subreddit, r/NoMansSkyTheGame, looked a bit different this weekend: it was invaded by the head of Sean Murray, Hello Games’ managing director. Several versions of Murray’s visage were being tossed around every page on the sub, and users could “boop” them with their mouse cursor to make them disappear. Perhaps more cruelly, all comments bore the message “This content has been paid for by Sony Interactive.” It’s proof that there’s still room for a little bitterness on gaming’s goofiest day of the year.

Hey, PlatinumGames fans! Have you ever dreamed of having PG President & CEO Kenichi Sato around to keep you company at home, at school or in the workplace? Of course you have!

Platinum CEO Kenichi Sato is by all indications a pretty good sport – he appeared as a fightable boss in Nier: Automata’s DLC, after all. Now Platinum’s offering you a pocket-sized version of their top executive, and there are eight versions to collect. There’s “Social Climber” Sato, “Presidential” Sato, and even “A Little Naughty” Sato. The surprise in the corner looks like the profile picture for Platinum founder and game designer Hideki Kamiya, who will yell at you on Twitter for asking him bad questions on any day of the year.

Kerillian gets an attitude adjustment with Vermintide 2 DLC

Who’s the mayfly now? Today we launch the first DLC for Vermintide 2. Mute all of Kerillian’s annoying banter.

Available NOW for only $1.99! pic.twitter.com/jxKFYfESdC

Smashing ratmen and Chaos warriors in Vermintide 2 is a blast, butman,Elf Waywatcher Kerillian can be a bit on the acidic side, can’t she? It seems Fatshark are aware of this, and for April Fools they teased players with a way to get her to pipe down with her sarcastic “lumberfoots” comments – a paid DLC.

To round things out, April Fools is a festive time in League of Legends, which is serving up a whole menu of food-related events, skins, emotes, and icons this weekend. There’s a new, speedier version of One for All to play, plus some fun new champion skins that you can buy for RP – check out Pizza Delivery Sivir, for instance. Even if you’re not into League, the promo video they’ve made is just delightful. You can get the full rundown over at the official site.