I find that the passage of time is now more or less defined by the arrival of new Fortnite weapons, and thankfully, this week is no different. The Drum Gun is the latest means of destruction heading to Epic’s battle royale.

As is well-established tradition at this point, the new weapon first appeared in Fortnite’s ‘new updates’ section, which opens up as players log into the game. The Drum Gun shows up there, and its caption says it comes “with a high capacity drum magazine and a quick rate of fire.”

There are plenty of them out there, so we’ve gathered the most worthy into a list of the best battle royale games.

Players who came to Fortnite from PUBG might recognise the gun as similar to the DP-28, which appeared in Bluehole’s offering to the genre. Fans of 1920s Americana will likely enjoy the Drum Gun for its easy comparisons to the weapons popularised as part of the Mafia’s arsenal. It’s likely no coincidence that the weapon has appeared in the same week as the Hardboiled and Gear Fortnite skins, which are both fashioned after old-timey detective outfits.

As to how it’ll handle in-game, I’m slightly unsure what role the Drum Gun is supposed to fill. We already have two automatic siege weapons – the LMG and the Minigun – with high ammo capacity and a quick rate of fire. It could be that the Drum Gun reduces recoil to make it more useful than either of those guns in actual firefights, rather than a means of destroying cover. That said, we already have plenty of assault rifles and SMGs to help out in those situations. Either way, expect the Drum Gun to show up in-game later this week. 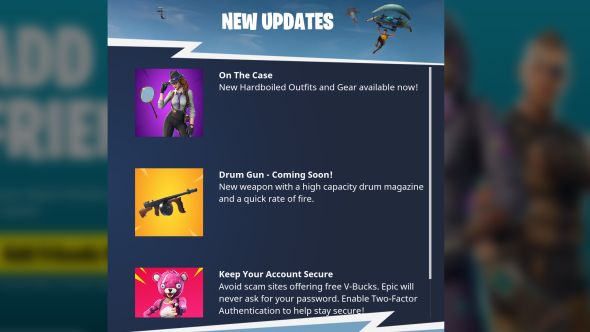 In other Fortnite news, the Fortnite rocket launch took place over the weekend, and appears to have left a crack in reality itself. What exactly that means for the game is uncertain, but expect some major map changes to take place when Fortnite Season 5 begins later this month.