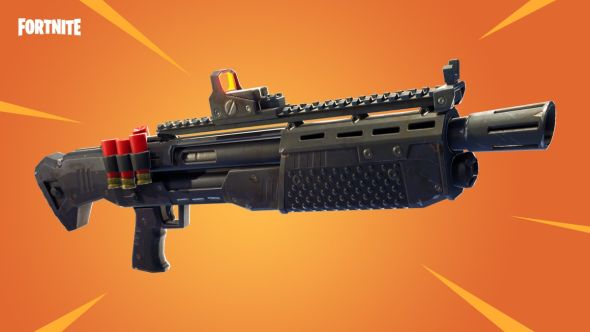 The latest in a long line of new weapons arriving in Fortnite Battle Royale is now live. Fortnite’s Heavy shotgun will be available should be available in-game right now.

Secure that Victory Royale with our Fortnite update tracker.

The Fortnite twitter account announced yesterday that the new weapon would release today (March 22) at 12:00 GMT, meaning that it will be live in-game right now. Happily, it seems that Epic have been keeping the gun hidden, as there will be no downtime or update required, so you should be able to start blasting your way to a Victory Royale right now.

The Heavy Shotgun differs from the game’s two other boomsticks in one major way – it has far longer range than either the Tactical or Pump Shotguns. From its design, I imagine it’ll have more in common with the former, meaning larger magazines and a higher fire-rate than the Pump, but with a trade-off in terms of damage. The gun does come with a scope attachment, as you can see in the image above, but whether this’ll actually work is yet to be seen.

Fortnite is being updated seemingly constantly – its most recent changes brought about the fast-paced Blitz Mode and remote explosives.