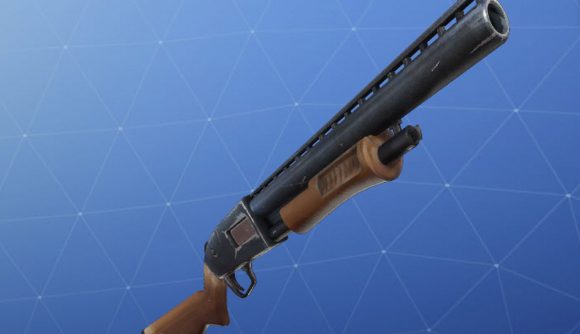 Fortnite’s all-important shotguns are set to receive a spate of changes in the game’s latest patch. Update v6.31 is set to release later this week, and look set to bring a significant accuracy buff to the Pump Shotguns.

Technically, it’s not really an accuracy buff – you still have to actually aim at your target, and recoil isn’t set to change – but the change means you’re far more likely to deal extra damage even if you only clip your target. Ahead of the next update, Fortnite design lead Eric Williamson took to Twitter to announce the change.

He said that the “update will include a Pump Shotgun rebalance to improve effectiveness.” That means that you’ll do more damage in close quarters, but a little less at longer range. More importantly, however, the change means that “all shotguns will have a minimum damage of 3 pellets,” even if you don’t actually land that many hits. The slight tweaks to the damage per pellet means that at close range, a blue shotgun will deal at least 30 damage, while a green one will do 28.5.

That’s a pretty marked difference – previously, if you just clipped an enemy with a pellet or two, you’d have to deal with the shame of a single-digit number damage number popping up. Now, even the most inaccurate players will be dealing up to three times more damage than they might have been before. Those damage numbers are still subject to distance-related fall-off, however, so you’re not guaranteed to do 30 damage every time.

The upcoming 6.31 update will include a Pump Shotgun rebalance to improve effectiveness: damage will increase in close quarters and range will be reduced slightly. Additionally, ALL shotguns will have a minimum damage of 3 pellets (even if only 1 or 2 hit).

At this point, it looks like only the Pump Shotgun is being rebalanced in the upcoming patch. The Tactical, Heavy, and Double-Barrel variants aren’t set to change, and nor are any of the reload, recoil, or weapon-switching times around any of the game’s shotguns. So no double-pumps any time soon, sorry.

If previous schedules are anything to go by, Fortnite patch 6.31 will likely arrive tomorrow. Until then, check out the Fortnite fish trophy locations – you’ll need to know them to complete all the Fortnite week 8 challenges, which also task you with gaining vehicle trick points, destroying different clay pigeons, and using the Grabber to help max out your Battle Pass.