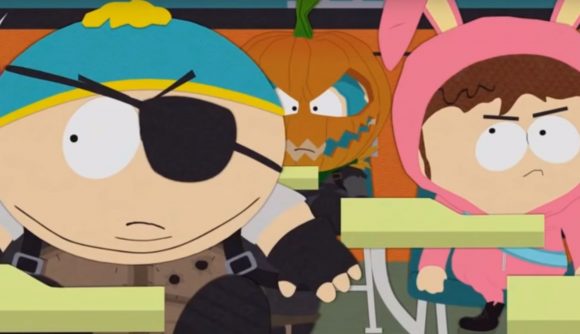 Part of Fortnite’s apparent world-domination stems from the way in which it’s managed to earn itself a spot in popular culture. Sports stars and celebrities have spoken about their love for the game, so it was no surprise that it would eventually end up on our TV screens. And what better show to portray it than South Park?

The cartoon’s Halloween episode aired earlier this week, and featured a storyline in which its cast of characters used a mysterious fleet of electric scooters to step their Trick or Treating up a level. As the episode progressed, however, it became clear that almost every character was decked out in a costume based on a Fortnite skin.

There’s quite the spread of cosmetics. The main cast of featured Cartman as BattleHawk, Stan as the fishy Leviathan skin, and Kenny in a Moisty Merman costume, while Jimmy featured in a Rabbit Raider costume. Elsewhere, a host of other characters showed up in skins ranging from Cuddle Team Leader to Season 5’s Drift skin. You can check them all out on Reddit.

This isn’t the first time that South Park has addressed the popular Battle Royale. Earlier this season, Cartman explains that “My mom said that if I flunk another math test she’s gonna ground me from playing Fortnite.” The show has regularly referenced videogames in its 21 year history, most famously in the WoW-themed episode, Make Love, Not Warcraft.

You can cross-reference our list of Fortnite skins to determine what exactly showed up last night. Check out our Fortnite Sheet Music locations guide if you need a helping hand to make sure you keep up to date with this season’s challenges and earn yourself that Dire skin.