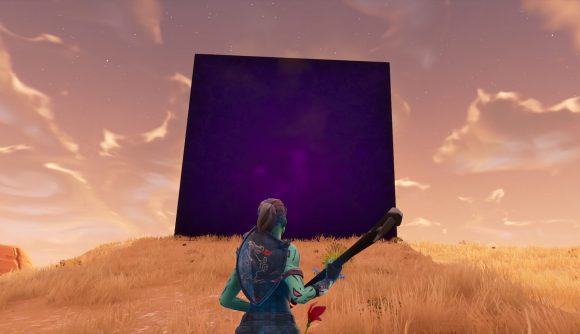 Fortnite Season 6 is due to begin this week, and keen to meet its deadline, Kevin the Cube is speeding up his traversal across the island. Unfortunately, Kevin hasn’t got much of an eye for preservation, meaning he’s wreaking havoc as he trundles across the map.

That was bad news for Wailing Woods a week or so ago. Kevin arrived from the south, before printing a rune, and then heading away to the west. Sadly, there’s not a lot of room in amongst all those trees for a giant alien cube, and now Wailing Woods is looking a lot more barren than it once was.

Since then, Kevin has made it all the way back over to Tilted Towers, where again, there’s not all that much space for extraterrestrial hexahedra. Kevin looks set to cause a lot of damage as he makes his way through the location, and he’s already been hard at work. His first victim? The newly-rebuilt store, which opened its doors to Fortnite’s bloodthirsty citizens just a few weeks ago.

If you’ll cast your mind back to the end of Season 3, you’ll remember that while Dusty Depot was more or less obliterated by the meteor strike, a smaller impact took out a building in the south-east corner of Tilted Towers.

Over time, that building has been rebuilt. First the smoking crater that remained was filled in, and then a construction site sprung up around it, as the building was slowly put back together. Two weeks ago, the store that it housed was triumphantly re-opened. There were balloons and everything. Check it out, via this screenshot from @FortniteBR on Twitter:

It looks better from the front: pic.twitter.com/W3C4ff2DSh

Kevin, however, cares not for the months of work put into the reconstruction. As a result, when he arrived in Tilted yesterday, it didn’t take long before he rolled thoughtlessly over the new building. You can see the devastating results of his callousness in the video below.

Kevin’s reign of terror isn’t over yet, as he’s still on the way to Loot Lake. Fortnite Season 6 is set to begin later this week, and it’s thought that the water in that lake is about to make way for lava – keep an eye out for the changes later this week – we’re expecting things to start heating up sometime later today, or early tomorrow.