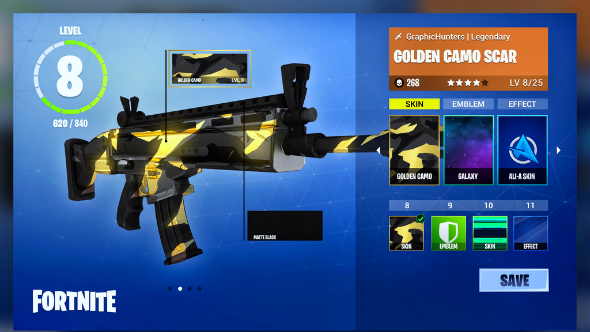 First-person shooters are famous for their weapon skins, from Call of Duty’s weed-themed DLC pack to CS:GO’s $60,000 sniper skin. With that in mind, one Fortnite Battle Royale player has come up with a skin concept for Epic’s shooter.

Redditor u/graphichunters uploaded an image to the Fortnite Battle Royale subreddit yesterday showing a handful of concepts for a sin for the SCAR, Fortnite’s best assault rifle. The version most apparent in the image above is a desert camouflage , although you can also see a space-themed ‘Galaxy’ skin. Graphichunters has also mocked up a profile page for the skins, showing how they might be implemented as in-game purchases or rewards.

This is all limited to (admittedly impressive) fan art at this point, but the popularity of the idea could encourage Epic to roll it out to the game. Graphichunters’ original post currently has more than 11,000 upvotes, and has garnered the attention of several Fortnite YouTubers. Epic have been pretty good at working with their game’s (huge) community, and are releasing new content almost every week, so I wouldn’t be too surprised to see weapon skins pop up in the not-too-distant future.

If you fancy some real Fortnite skins, then you’re in luck – tomorrow sees the launch of the Fortnite Battle Royale starter pack, which includes skins, bling, and V-bucks.