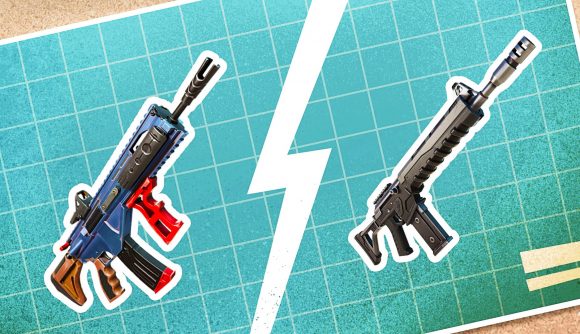 Fortnite’s funding stations are one of the more peculiar items in the battle royale game. They don’t directly help you to win, though they can influence how proceedings play out. They’re great as far as community-building goes, but they’ve also had a rough couple of days.

Despite the ongoing battle between the combat AR and the MK-7 on the funding stations, Epic Games disabled them due to stability issues on April 5. It’s quite possible that having a bunch of players donating gold bars to them at once across multiple map points during countless games was simply too much.

The funding stations ended up being down for a little over 30 hours, with them coming back online late last night (for those of us in the UK), which is good news for those that enjoy the collective action needed to figure out which gun is coming back to Fortnite. Donating isn’t just a sign of commitment though, as each time you do so, you’ll also get a small reward back.

You can find these stations in named locations – they’ll appear as a money bag symbol on the mini-map. Just remember to check your surroundings before going hard on the donations, because it’s incredibly easy for someone to shoot you while you’re donating.

It’s also worth noting that, at the time of writing, the MK-7 has an impressive lead of nearly 19%. It looks like the MK-7 is going to be the winner unless combat AR fans rally together and start spending their gold.

In other news, the new Assassin’s Creed skins are out now, and it also looks as though we could be getting some Star Wars content in the future. Either that, or we’re all being messed with.