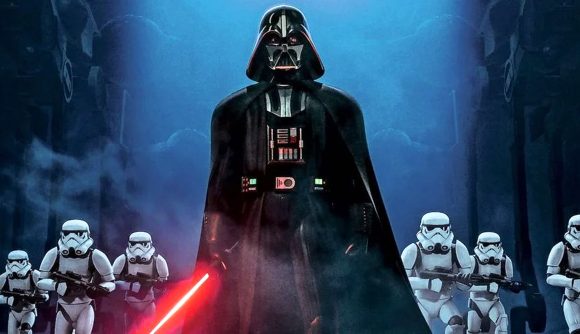 Rumours of a Fortnite Star Wars season have been flying around like X-Wings for a long, long time now. From Marvel characters to Assassin’s Creed protagonists, the battle royale game already has more cameos than you could shake a lightsaber at – and there’s been one major Fortnite Star Wars crossover already. Well, it looks as though those rumours could well be true.

If real, this strongly suggests that Darth Vader is planned for Fortnite Chapter 3 Season 3, and that season could have more events planned in a galaxy far, far away. Things get even more suspicious when you check out Donald Mustard’s Twitter (below), where he’s posted an image of a pixel-art style Chewbacca and C-3PO with the caption “sooooo many secrets here…”

Mustard also posted that same image to Instagram with a different caption saying “that’s no Moon!?” which is, of course, a reference to the mighty world-destroying Death Star from the original trilogy that Luke Skywalker took out because someone forgot to close up a vent or something.

Now, it’s quite possible that Donald Mustard – and, indeed, Epic in general – are just messing with everyone, but it’s not like Star Wars is an absurd suggestion here. Fortnite already features characters like Boba Fett, and lightsabers recently got re-added to the game’s files. We’ll have to wait and see, but we wouldn’t be surprised to see more hints from Mustard in the meantime.

During the State of Unreal showcase there was a segment showing the Intro Cinematic for Ch3 – S1.

While we’re on the subject of crossovers though, have you tried out the Call of Duty maps in Fortnite? They’re a lot of fun, and surprisingly in-depth too.