Out with the old, in the with the new. In this case the old is Mythic guns like the Boom Bow and Meowscles’ Peow Peow Rifle, and the new is Season 3 Mythic weapons like Ocean’s Bottomless Chug Jug and Kit’s Shockwave Launcher.

Season 3’s roster of Fortnite bosses all come packing new Mythic weapons and items. So if you want to get these rare goodies for yourself then you’ll need to plan your drop carefully, know exactly which boss you’re hunting, and execute with precision. Make sure not to hang around for too long either, as there are plenty of players looking to swoop in and steal your loot after you’ve done all of the hard work defeating the boss.

But the loot is definitely worth the fight, whether that’s the increased mobility of the new Glider Gun or the limitless healing of the Mythic Chug Jug. To help you get your hands on these Mythic guns and items as fast as possible we’re breaking down where to find each of them and exactly how each of the Season 3 Mythics works.

You’ll get this from defeating Kit, the cat in a mech suit, in the aptly named Catty Corner region of the map. This zone is southeast of Lazy Lake in case you’ve not visited it before.

The area itself is packed with henchmen, so make sure you’ve got some materials going in so you can create your own cover. Kit takes a lot of damage, but you’ll find the feline felon goes down after a few reloads.

Kit’s Shockwave Launcher is a grenade launcher that shoots impact grenades. It uses rockets as its ammo and appears to have a 6-shell drum capacity. The Shockwave Launcher can either be used to give you some extra mobility, by firing it at your feet and letting the impact knock you a fair distance, or to send opponents flying from their forts or down mountains.

Kit’s second Mythic gun is the Kit’s Charge Shotgun. A fully charged blast with this shotgun can deal upwards of 200 damage if you connect some pellets with an enemy’s head, making this a one-shot kill in some situations. If you can land your shots then this is a devastating firearm. Its magazine size is 5 and it takes just over 4 seconds to reload.

This is one of the most powerful items to be added to Fortnite’s battle royale mode as it’s a Chug Jug that replenishes every minute after use. Now this obviously won’t save you if you’re being aggressively pushed, but there’s no better way to transition between fights than being able to gulp down a whole Chug Jug that maxes out your health and shields. It’s worth keeping some mini shield potions spare for quick heals.

To get this you’ll need to defeat Ocean, who can be found at The Fortilla in the southwest of the battle royale map. Ocean can be found in a different spot in this named location every game and you’ll have the best chance of taking her down if she spawns inside a building as this will provide lots of cover from any nearby henchmen. 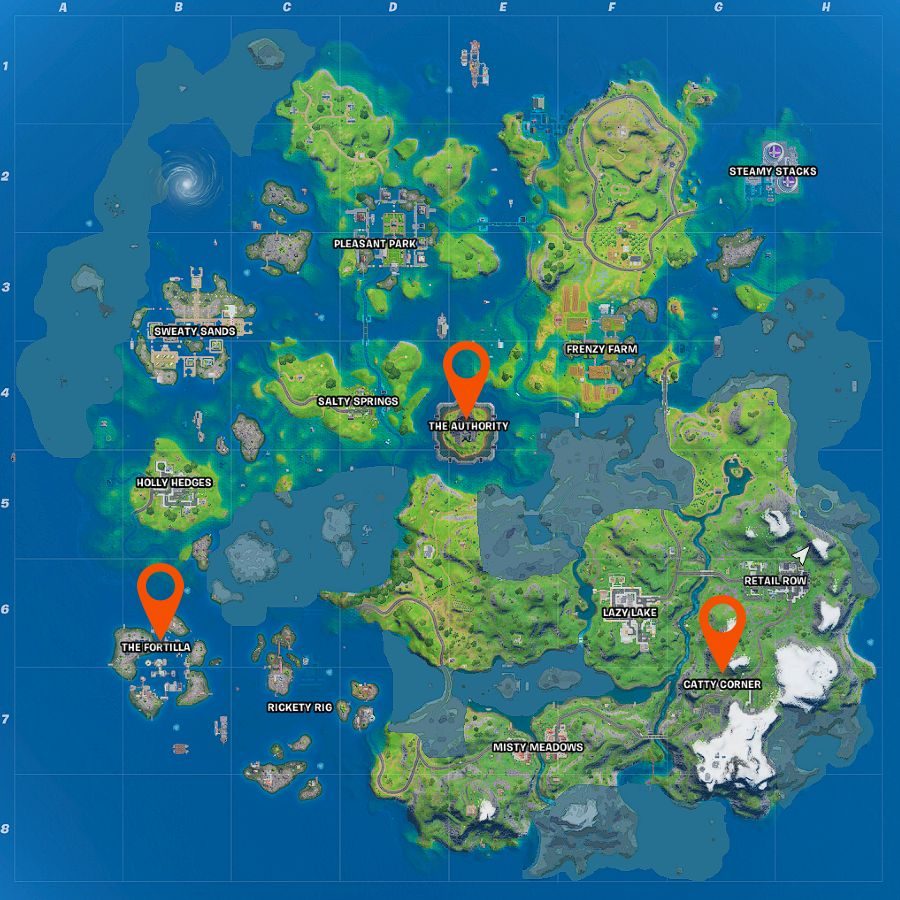 Ocean also drops the Ocean’s Burst Assault Rifle, which deals a whopping 37 damage per shot, which goes up to 55 damage per headshot. This fires in two-round bursts which means you can down a fully shielded player with two bursts to the head – they’ll drop in just over a second.

Jules can be found in The Authority, which replaced The Agency location from Season 2 – it’s right in the middle of the map. Much like the Drum Gun dropped by Midas in Season 2, this is also one of the strongest Fortnite guns, especially as it deals a lot of damage to materials. Its DPS is 204, it has a magazine size of 40, and takes just 2.7 seconds to reload.

Jules’ Glider Gun is like the grapple gun from previous Fortnite seasons, but when you grapple up high you can immediately transition into your glider. This is a great item for mobility and will help you keep up with even the fastest storm circles.