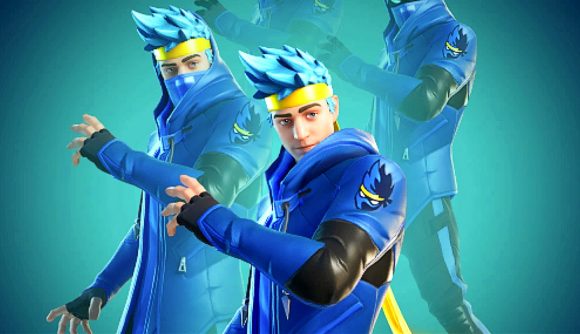 The Ninja Fortnite skin, which you can check out below, has been discovered and shared by various dataminers on Twitter, and it’s official – Ninja himself has now announced the skin. “I’ve dreamt of having a skin in Fortnite since I started playing the game. Today, my dream becomes reality,” the streamer tweets, adding a picture of the skin which you can check out further down.

In addition to the skin itself, the new Ninja addition to Fortnite also includes his now iconic victory dance – the ‘Pon Pon’ – as an emote. You can get a look at this via a tweet from user Hypex below. In the clip, you can also see he’s got back bling called ‘Ninja’s Edge’ and dual katanas as harvesting tools.

I've dreamt of having a skin in Fortnite since I started playing the game. Today, my dream becomes reality. Get the Ninja Fortnite Skin in the Epic store Thursday 6 p.m. CST-Sunday 7 p.m. Don't forget to use code NINJA! #NinjaSkin #EpicPartner pic.twitter.com/xTn9UlbkGI

Ninja’s signature dance has also been included as an emote – check it out below:

What is the fortnite ninja skin release date?

Speaking of… Here are the best ninja games on PC

You’ll be able to grab it from the Epic Store during that time.