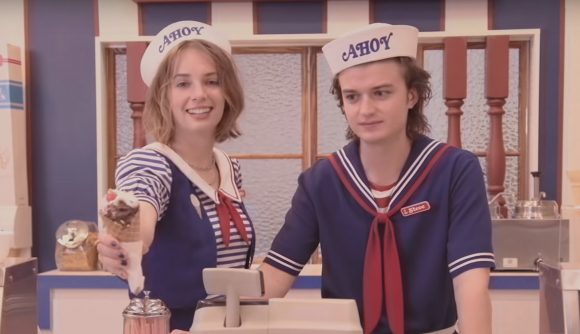 Stranger Things appears to be Fortnite’s latest pop culture crossover, as an easter egg in the new Season 9 map is a very direct reference to the show’s upcoming third season. After another Avengers event and hints toward a John Wick event, there’s apparently no limit to Fortnite’s crossover potential, and a proper trip to Hawkins, Indiana wouldn’t be out of line.

Decor in the shop is a perfect match for what we’ve seen from those teasers, so this isn’t just a coincidental bit of retail naming. John Wick’s house also hit the map in this update, and datamined files suggest that Fortnite will get a new event featuring the assassin – this store could be a teaser for something similar with Stranger Things.

Stranger Things 3 will launch on July 4, which will be during the duration of Fortnite Season 9.

You can see some footage of the digital Scoops Ahoy above.

Related: Drop into one of the best battle royale games

More than one Stranger Things game got cancelled at Telltale, and though the show has gotten some smaller adaptations built with appropriate 80s nostalgia, there’s never been a big-scale Stranger Things game. A Fortnite crossover might be as close as we’re getting for the foreseeable future.