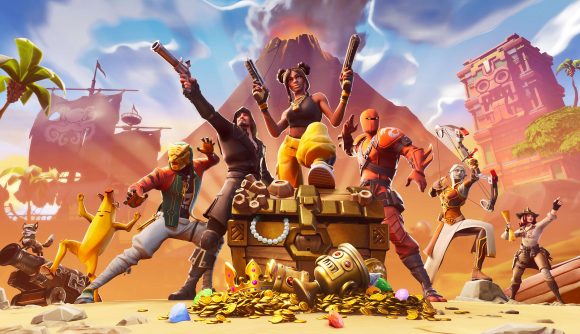 Fortnite is big. Yes, that much is obvious, but it’s massive on a scale that few other games can even dream of approaching. If any other publisher knows what it’s like to launch a game on an unfathomable scale, it’s Take-Two – GTA V sales figures are still astronomical. But CEO Strauss Zelnick says Fortnite isn’t affecting Take-Two’s own titles.

“I’m occasionally asked, ‘Is the Fortnite effect affecting the industry?’ And the answer is, Fortnite never affected the industry,” Zelnick says at the Global Consumer, Technology & Services Conference today (via GamesIndustry.biz). “Fortnite didn’t affect us in the least. We had huge hits when Fortnite was in the market, because Fortnite is different from our titles, and our titles are different than Fortnite.”

Zelnick was responding to a question about what the success of free-to-play titles would mean for premium paid games. “I don’t believe for a minute that simply being available in one business model means something that is completely different can’t be available in another business model,” he says.

“‘Is Fortnite crowding out other titles?’ No, not in the least. I think some companies point at Fornite as sort of an excuse for why their titles didn’t do well. But our view is, when titles are great, they do well, and when they’re not as good, they don’t do well. Put out something really great in entertainment, and people will show up for it.”

That’s not to say that the company hasn’t been finding success in business models that borrow from free-to-play. Zelnick’s comments every Take-Two game will have microtransactions became infamous back in 2017, though more recently he’s said that controversial steps like loot boxes are “not material” to the company’s bottom line.

Read more: These are the best free PC games

While the Fortnite player count means plenty of publishers will want to follow that success, not everyone is eager to change around a business model to match new trends.