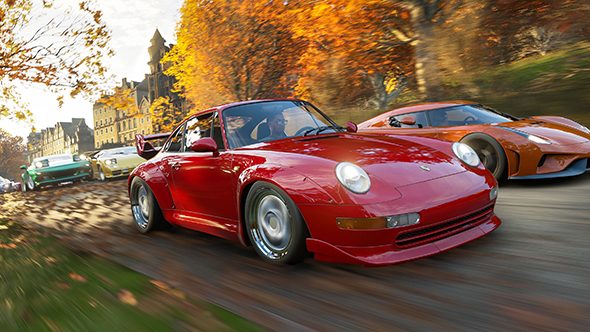 Forza Horizon 4 takes the open-world racing series fully online as it heads to a new UK setting. The introduction of other players to the world adds a whole new dimension of potential frustration for would-be racers. With human drivers populating the rest of the world, you’ve got the risk of troublemakers constantly trying to run you off the road, but Playground Games is providing assurance that this won’t be a problem.

That’s because you can’t actually crash in Horizon 4 – at least not into other players’ cars. Making contact is impossible against randos in the open world, because there’s an auto-ghosting feature that sees cars competing for the same piece of the road just phase right through one another. Contact is enabled when you group up with friends for more physical competition, but you won’t have to worry when you’re casually driving around the world.

Take the starting line and check out the best racing games on PC.

That also means you’re safe to step away from the game for a sandwich even when in a connected world, as art director Benjamin Penrose notes to PC Gamer. If you’ve got a spotty internet connection, you needn’t worry about all this talk of online, either – the game will seamlessly transition from single-player to multiplayer and back even if you lose connection.

Here’s the reveal trailer, in case you missed it:

The UK setting for Forza Horizon 4 brings the game’s festival stylings to a new area, and the appearance of Glastonbury seems entirely appropriate as a result. (Also, I hear that seasons will change everything.) Forza Horizon 4 is set to release on October 2, 2018.