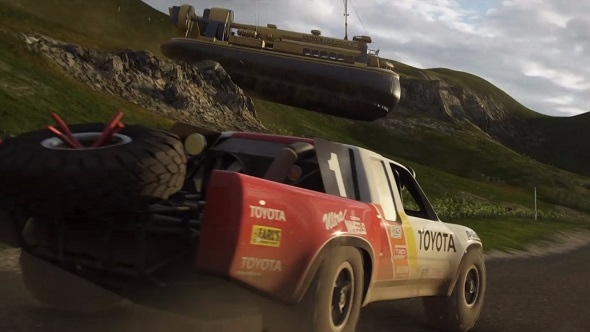 Forza Horizon 4 will release on October 2nd, and will be “set in beautiful, historic Britain,” in the words of Playground Games’ creative director Ralph Fulton during Microsoft’s E3 2018 presentation. That setting is something of a big deal as rumours had previously suggested the series was headed to Japan. There followed some typically stunning graphics that show off our damp little island at its very best.

You’ll race around in a shared open world with other players in Forza Horizon 4. Exciting new features include dynamic seasons, which will join with dynamic weather and time of day to “change everything.” The demo showed two snippets of gameplay, one in autumn, one in winter – when thick snow makes for more challenging handling, and a lake has frozen over to open up a new gameplay area. A blimp indicates the opening of a new world event – a race over the lake.

Hopefully, Forza Horizon 4 will make it on to our list of the best racing games on PC.

Since the initial announcement, we have found out that Forza Horizon 4 will include Glastonbury as a driveable location, but not London. Probably for the best given that it’s usually quicker to walk or cycle around the capital anyway.

We also know that Edinburgh will feature as the hub city so expect to be hanging out with the famous Scottish castles a lot.

Other details include not being able to crash into other online players unless they’re your friends, the return and improvement of the Forza Horizon race designer, and the ability to complete the game without ever leaving your garage.