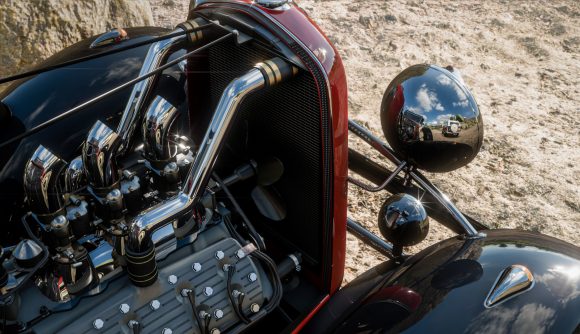 Forza Horizon 5 launches on November 9, and we’ve had a chance to catch up on all things PC with the game’s creative director Mike Brown and technical art director Gareth Harwood. We talked about the importance of accessibility, how SSDs transformed the team’s design approach, and the technologies the development team has employed to make the game as visually stunning as possible.

In addition to the Forza Horizon 5 system requirements, Playground Games recently revealed that the game will sport a number of PC-exclusive features, such as support for 21:9 resolutions, unlocked frame rates, and a massive amount of graphics settings to tinker with. However, it was also revealed that the game’s implementation of ray tracing would be limited to the game’s vehicle viewer mode, Forzavista.

This is the first time any form of ray tracing has appeared in a Forza game, which Harwood explains came about thanks to the Xbox Series support for DXR (DirectX Raytracing). “Having platforms like the Xbox Series consoles allows all these capabilities to filter down into other platforms, and in some cases turn them up to the next level on gaming PCs.”

There are several ways ray tracing can be implemented into a video game, such as reflections, shadows, and global illumination. However, it’s an extremely taxing technology that can bring even the best graphics to their knees. Hardwood explains that “the reason why raytracing is limited to the Forzavista mode is because we have so much stuff that we want to show players, like our vistas, increased object density, and our new GI (global illumination) lighting system.” He elaborates, “all of these make use of available graphics processing power, and it’s where we’ve decided to focus our efforts for the moment.”

Brown gives further context to the decision by saying, “it’s a case of what benefits the frame more. When you’re driving at nearly 300 miles per hour, high quality LODs and beautiful shadows have greater visual impact than ray traced reflections. Whereas something like Forzavista is very slow paced and benefits more from the technology.”

It’s unquestionable that ray tracing brings a new level of depth to game visuals, and Forza Horizon 5’s Forzavista mode is no exception. Having light and reflections behave in a more realistic manner allows your vehicle collection to feel more real and makes you wish you could get behind the wheel all the more. Still, we hope that wider-reaching ray tracing support isn’t entirely off the table for Forza Horizon 5 and future installments.