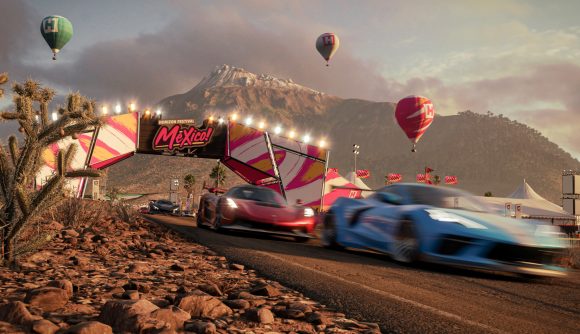 We’re just under a week from Forza Horizon 5’s November 9 release date, so what better time to sit down with developer Playground Games and talk about the game? We got in the driver’s seat with creative director Mike Brown and technical art director Gareth Harwood to talk shop about the importance of accessibility, why ray tracing is limited to the Forzavista model viewer, and how SSDs transformed the team’s design approach.

Playground Games recently revealed the Forza Horizon 5 system requirements, which recommends an SSD if you want to hit the ‘Ideal’ specification. While the best gaming SSDs have been commonplace in gaming PCs for many years, consoles were stuck with HDDs until the arrival of the new Xbox Series X, S, and PS5.

Brown says that “SSDs have really benefitted us in terms of Forza Horizon 5’s design. Having the Xbox One as our previous lead platform, with its HDD, we had to be very conscious of loading times and be strategic in what cars we gave the player and what cars would race with them.” He elaborates, “this problem kind of goes away with an SSD, and we’re able to give the player more cars than we ever have previously and have you changing between them more frequently.”

Solid state drives have additional technical benefits, as Harwood details, “I don’t think we’d ever pushed how much we could rely on SSDs to stream in data. They improve load times, but they also allow texture resolution to go higher than we ever thought possible, because we don’t have to factor in the limitations of a spinning disk.”

If you were worried that Forza Horizon 5 would perform poorly to the point of requiring an SSD, Brown reassures us that “while players on the Xbox One and PC players with hard drives will still have to contend with longer load times, we’ve made sure that the game remains a great experience with fantastic visuals to enjoy.”

Harwood reveals that the development team has “implemented a high-end and low-end track, to assist with making Forza Horizon 5 as scalable as possible. While the low-end track omits some textures, the high-end track features utilises SSDs and higher RAM usage to achieve better texture streaming. We also have optional textures which sit outside our normal streaming portions because we’ve learned that SSDs can handle these kinds of processes better than our own streaming systems.”